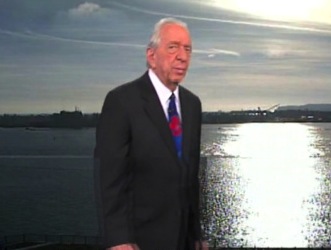 Who is John Coleman? Why would he go to so much effort to try and “debunk” the climate engineering reality? Even more importantly, why would anyone who claims to be fighting the geoengineering insanity post information from Coleman as if he were an oracle of truth? Unfortunately, a few anti-climate engineering activists and individuals have blatantly ignored Coleman’s climate engineering denial in order to post his climate change denial rants. John Coleman was one of the Weather Channel founders, but he is NOT a meteorologist or a climatologist. In fact, Coleman is not a scientist at all, but rather he has a journalism degree.  This does not automatically discredit everything he says, but are his conclusions backed up with credible data? In regard to both subjects mentioned above, the answer is clearly no. National Radio show announcer Jack Blood publicly challenged John Coleman to debate the climate engineering issue on the air with me, Coleman refused. The Washington Post asks “Why Does Anyone Pay Attention To John Coleman”?   It does seem Coleman is just the sort of “journalist” the power structure likes to use for putting out messages of denial on subjects like geoengineering and climate change. So what has Coleman said about climate engineering? The video below is from Coleman, why would anyone who claimed to be fighting geoengineering post information from such a source?

Are there others like Coleman? Yes, Tim Ball is in a very similar category. Ball claimed to have a degree in climatology from the University of Winnipeg. The problem with this claim is that the University of Winnipeg does not have (and has never had) a climatology department. Just as unfortunately for the cause of exposing climate engineering, the same anti-climate engineering activists that post Coleman as a beacon of truth also post completely unsupportable data by Mr. Ball.  Radio show announcer Vincent Eastwood tried to get Tim Ball to debate climate engineering on the air with me. Ball, just like Coleman, refused to debate or in any way even acknowledge the climate engineering issue. So what is the point to all of this? Investigate the facts before coming to conclusions. The truth is not what we wish it was or would like it to be, rather it is what it is. If we want the credibility necessary to prevail in the fight to expose and halt the climate engineering insanity, we MUST stand on solid ground with our data and our conclusions. Anything less is a hole in the hull of our ship.

The short video below provides another look into the disinformation machine and those who facilitate it.

We must all learn to sift out credible data from the onslaught of special interest propaganda that is hurled at us each and every day. We must get past our well programmed  biases so we might see more clearly. Most of all, we must all use and constantly exercise our own reasoning abilities. Truths are not so often black and white, but rather they are more complicated than we would like them to be. When we stand on solid factual ground with our conclusions, we can sound the alarm with the confidence necessary for people to listen.
DW
geoengineeringwatch.org