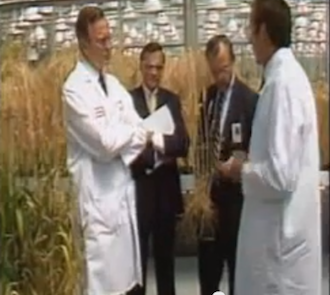 Our government is nothing more than a state sponsored crime syndicate. Those who lead the cabal of power, and those they serve, exist only to perpetuate their own agendas. The common good is never a consideration for them. From wars of aggression, to global geoengineering, to the creation and forced distribution of genetically modified "Frankenfoods", the power structure does whatever they want because they can. How has the cabal been immune to any repercussions for their actions for so long? Because the general population has so far been unwilling to prioritize the protection of their children's future above their own personal pursuit of pleasure. Now that the walls are closing in from every side, denial and delusion regarding the common threats we face are no longer a refuge from reality. Global geoengineering programs have forced us all to live and breath under toxic skies. The complete contamination of our food supply with genetically modified organisms has forced us all to consume what is not fit to eat. The article and 2 minute film clip below capture the collusion between George H. W. Bush and Monsanto that fully kicked off the ongoing GMO nightmare. This is a stellar example of "business as usual" between the criminals that currently run the world. Educate yourself and help to sound the alarm.
Dane Wigington
geoengineeringwatch.org

Supporters of genetically modified or engineered foods want you to believe that the concept is no big deal and that humans have been cross-breeding and “modifying” food for centuries.

In reality, however, GMO seeds and foods created in a lab are far different than the traditional hybrid crop. In fact, the latter has only been in existence for a few decades.

If it weren’t for the intense lobbying of St. Louis-based biotech giant Monsanto, GMOs would likely never have been introduced at all in the United States.

AltHealthWorks reports that in 1986, four executives from Monsanto visited the White House to see then-Vice President George H. W. Bush with the objective of gaining a valuable ally in the most powerful government in the world.

Although President Ronald Reagan still had two years left in his second term, it was already widely believed at that time that Bush the Elder would run for the presidency in 1988.

Betting on a deregulation president

Reagan’s administration was known for many accomplishments: improving the economy, strengthening the military, and dealing decisively with a Soviet Union whose power and influence was waning. However, Reagan was also a deregulator; if there was red tape he could cut in Washington in order to benefit business, industry and the economy in general, he would gladly do it.

Enter Monsanto, a company that wanted to get in on the deregulation bandwagon of the era.

One year later, Bush took the bait and paid a visit to the company’s headquarters for a media event that included personal time with company scientists and reps.

Monsanto’s reps wanted Bush to help them get their dangerously untested GMOs to market, and pleaded with him…to help make it happen.

What Bush said in response gave rise to a culture of blissful ignorance and irresponsibility that allowed Monsanto’s controversial “frankencrops” to spread virtually unopposed ever since.

The company had tens of millions of dollars at stake and a number of regulatory hurdles to overcome as the Department of Agriculture painstakingly went through its regulatory approval process.

In 1987, Monsanto found itself in a difficult position. The company desperately wanted to begin testing their GMO crops in a live environment – a farm in Illinois – but they needed USDA approval in order to move forward.

Initially, Monsanto executives were ready to introduce GMOs slowly. However, the company grew increasingly frustrated by the approval process and instead opted to pursue a more aggressive policy of “eliminating what White House hardliners called ‘bureaucratic hurdles’ like health and environmental safety testing, which were Monsanto’s key problems,” according to narrator and director Marie-Monique Robin in the film, The World According to Monsanto.

In a clip that appears in the film, Bush is seen meeting with Monsanto scientists and reps as cameras from the media flash and reporters scratch notes. One scientist proceeds to explain the basics of how GMO foods are created.

The seven words that changed it all

“…We take DNA, cut it apart, mix different pieces together and then rejoin them, splice them back together,” he says. “This tube contains DNA that was made from a bacterium…”

“In this case it resists the herbicide,” the Monsanto rep says. Another rep adds, “We have a fabulous herbicide.”

They were talking about Roundup, the glyphosate-containing product whose main ingredient was recently declared a likely human carcinogen by the World Health Organization.

This is followed by seven words that will eventually change the game in favor of Monsanto. The clip shows Bush laughing and saying of Monsanto’s pleas to hasten the regulatory process, “Call me…we’re in the dereg business.” Then he adds, “Maybe we can help.”

With that, the rise of the GMO industry in the U.S. began, and as many have demonstrated, it is growing at the expense of the U.S. consumer.

Towards the end of the clip, Bush’s vice president, Dan Quayle, makes an announcement that describes the real reason that GMOs were fast-tracked in the U.S. even though other countries are banning them.