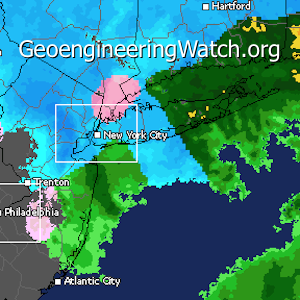 "WInter Storm Stella" is the latest all out geoengineering assault to be launched by the power structure against the US population. "Stella" is now also "predicted" to inflict winter weather warfare damage in regions of the UK in spite of London remaining warm.

The first satellite image below (from NASA), clearly reveals massive atmospheric aerosol spraying operations in skies along the US East Coast as the climate engineers prepared for the manufacturing of "Winter Storm Stella". Virtually all the "cloud cover" visible in the NASA satellite photo is from geoengineering / solar radiation management (SRM) aerosols being sprayed by jet aircraft.

The planet is now covered in a haze of toxic metal and chemical particulates which are a major component of "global dimming". These highly toxic materials are a primary aspect of the ongoing "solar radiation management" climate intervention programs.

The next two radar images below should be examined very carefully. The scenario they reveal is meteorologically impossible short of massive climate engineering deployments of chemical ice nucleating materials. The "stripe" of snow just north of New York that extends far out into the Atlantic Ocean is shocking proof of chemical ice nucleation operations being carried out. 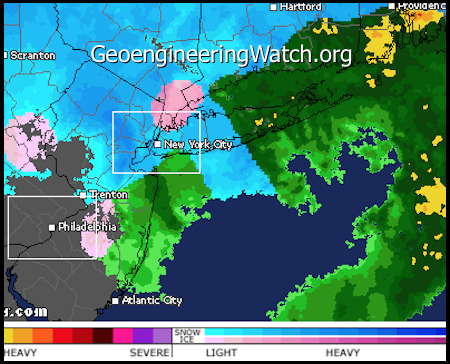 Glaring anomalies like the strip of snow extending through warm bands of incoming rain (shown above) are never  addressed or even mentioned by mainstream meteorologists. Mainstream sources of weather and climate data are being used to cover the tracks of the climate engineers. In regard to all the meteorologists who are engaged in the climate engineering cover-up, we must conclude one of two possibilities, they are either criminally unqualified for the positions they hold and thus don't recognize the inarguable impacts of the ongoing geoenigneering planetary assault. Or, they are paid liars who will parrot any narrative they are given by those who supply their paychecks and pensions.

The next screenshot (shown below) was taken 20 minutes after the image shown above. The first stripe of chemically ice nucleated precipitation that was north of NY has already reverted back to rain (leaving a patch of grey (sleet) on the map just north of NY). In the image below another completely anomalous stripe of snow has appeared just south of NY (which extents out into the Atlantic through the far above freezing temperature bands of rain). As this second line of chemically nucleated precipitation drifted north, it likely provided the New York City snow which was an objective of the climate engineers. 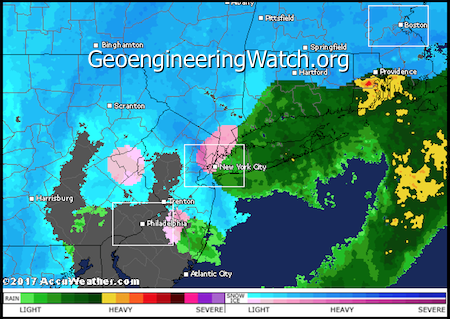 The short but very revealing radar animation loop below clearly shows the chemically nucleated "snow stripes" flashing in and out of the radar screen.

The chemically nucleated winter weather warfare has been ramped up to levels that are far beyond blatant.

The temperature map below clearly illustrates just how warm the surface air temperatures are along the US North East coast. 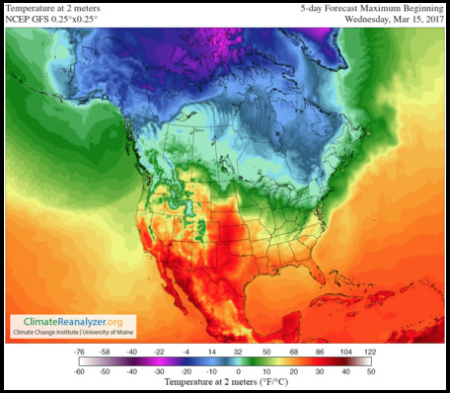 Why would far above freezing temperature moisture migrating over these regions suddenly "change over" to snow for no apparent reason? 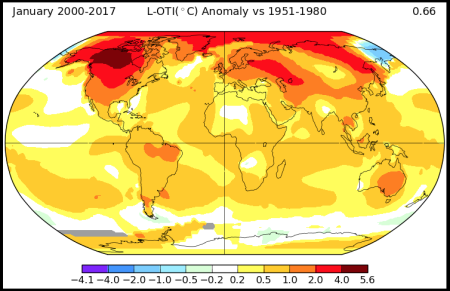 Globally there are almost no regions that have had below normal overall temperatures during the last 17 years.

The next GISS map for January, 2017, shows far more magnified and alarming temperature anomalies. The blue toned "below normal temperature" regions are meteorologically unprecedented given the overall surrounding far above normal temperatures. Further, recent studies reveal that "rich nations are warming at a slower rate than poor nations", such a scenario is not possible without global covert climate intervention programs. 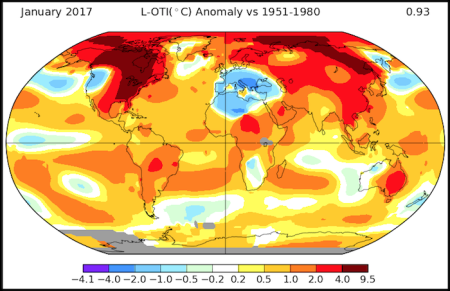 The start of 2017 has already seen many thousands of high temperature records broken in the US  following years of record setting heat all over the world. Record ice melting at the poles is also occurring with sea ice at record low levels in both polar regions. The climate engineers commonly orchestrate winter storms like "Winter Storm Stella" in the highest population zones where they can create the most sensationalized headlines in order to add to the populations continued climate confusion.

The NOAA "Departure From Normal Temperature"  forecast map below reveals still more alarming extreme temperature anomalies predicted for the US. 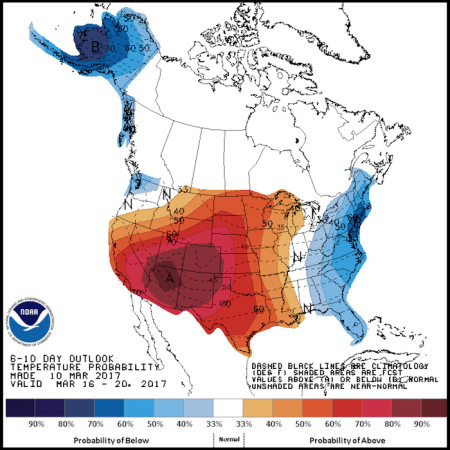 Each color band in the map above represents a 3 to 4 degree forecasted departure from average temperatures (reds for above, blues for below). Such extreme imbalances are deeply alarming, historically unprecedented, and meteorologically impossible without massive climate intervention programs.

Global  geoengineering / climate intervention programs are creating radical weather whiplash scenarios all over the world. As chemically ice nucleated engineered cool-downs are carried out, the highly toxic endothermic reacting materials being used can and do radically lower ground temperatures by creating a cool dense layer of air that settles to the surface. The weather-makers are becoming ever more aggressive and desperate in their ongoing attempts to engineer winter in a rapidly warming world. The fight to expose and halt toxic climate engineering programs is nothing less than a fight for life. Find out what you can do to help sound the alarm by clicking HERE.
DW