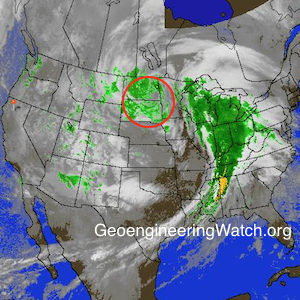 The Dakota pipeline protests have become the frontline representation of the critical struggle against a completely out of control totalitarian power structure. Those in power cannot afford to allow this justifiable protest to continue or succeed. Geoengineering/weather warfare has now been added to the already long list of criminal assaults that have been hurled at the peaceful pipeline protesters. In the coming days and weeks, weather warfare will likely be the most deadly and effective weapon that the power structure will wield against the pieceful Dakota pipeling protesters. 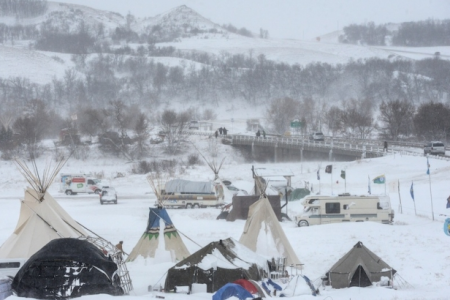 Climate engineering and the use of toxic chemical ice nucleation elements are the reason a record early season snow has just occurred in the exact region of the protests (named winter storm "Blanche"). If you don't believe snowstorms can be completely engineered, you have not done your research. Weather warfare has long since been a covert weapon of choice for the criminals that truly control our government. Is it just a coincidence that a record early season snowstorm also decimated the Occupy Wall Street protesters? 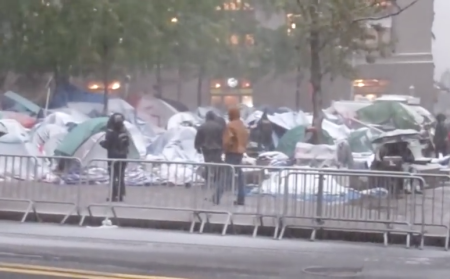 Weather modification activities were also noted over the massive historical gathering in Woodstock. The combination satellite radar images below clearly reveal extreme and completely unnatural weather anomalies over the continental US. The first satellite/radar image below was taken at 11:30 am (ET), Monday, shows a ribbon of warm air and moisture flowing in a northeasterly direction all the way from far west of Baja California, across Mexico and Texas (picking up even more warm moisture from the Gulf of Mexico). This flow of warm air and moisture pushes north where some of it eventually gets caught up in the counterclockwise low pressure system being held directly over the protest region (via atmospheric manipulation with radio frequency/microwave transmissions). An engineered winter chemical ice nucleation assault (by jet aircraft aerosol spraying) was then unleashed in the stationary low pressure circulation. 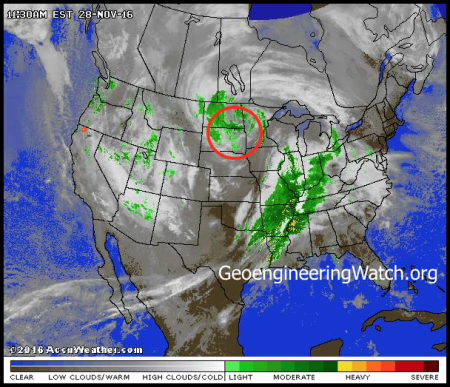 Massive atmospheric aerosol spraying operations were also occurring off of the US west coast on Monday, November 28, 2016. The aerosol saturation reduces west coast precipitation and thus contributes to the effective migration of Pacific moisture further east toward the low pressure vortex over the protest zone. 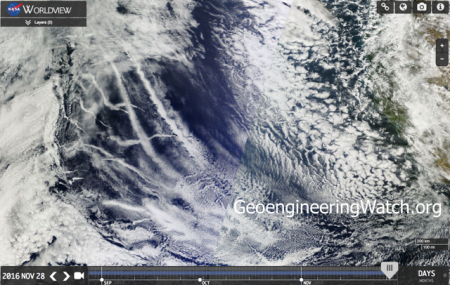 In addition to the extensive aerosol spraying visible in this NASA satellite image, some radio frequency manipulation waves can be seen in the upper right corner of the satellite image.

By the evening of Monday, November 28, 2016, the huge plum of warm moisture is pulled closer to the still stationary spinning vortex over the Dakota protests. 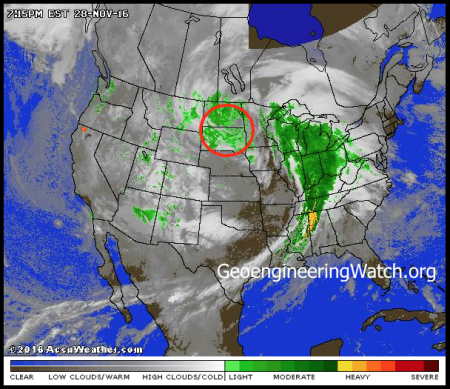 Aerosolized chemically cooled moisture flowing in from the Pacific also merges with the engineered Dakota snowstorm.

At 9:45 am (ET), November 30, 2016, the stationary Dakota vortex continues to spin (winter storm "Blanche"). The plume of warm Gulf of Mexico moisture is now directed at Maine, where "winter storm Blanche" has been scheduled by the weather makers to continue (completely separated from the still ongoing original "winter storm Blanche" over the Dakotas). 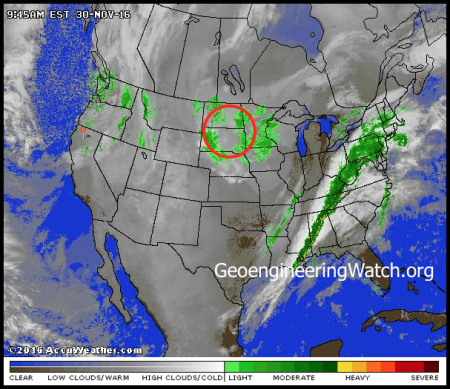 The "departure from normal high temperature" map below reveals just how warm it actually was in the regions near the center of the Dakota storm and along the entire track from which much of the storm moisture came. 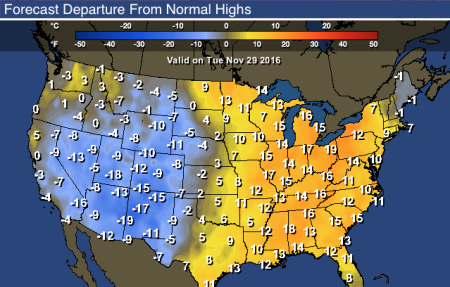 Radical temperature divides, like the departures from "normal" reflected in the map above (shown in degrees Fharenheit +/-), are historically unprecedented. Now such incredible imbalances have increasingly become the norm.

The animation below contains the most revealing and important images of all. Drifting cells of liquid precipitation (rain) should not just "flash out" to frozen precipitation (snow) for no reason whatsoever (no change in topographical elevation and no colliding cold air masses). Areas of the storm then suddenly flash back to rain as the jet aircraft sprayed chemical ice nucleating agents settle down through the air column. Examine this animation closely, it is the "smoking gun" of a completely engineered chemically nucleated weather warfare assault.

Massive climate engineering/chemical ice nucleation deployments can and will continue to create toxic cool-downs and radical weather anomolies. These anomalies will continue to manipulate the perception of populations who don't realize (or are not willing to accept) what is going on in our skies.  All the weather modeling for NOAA and NWS (National Weather Service) is done by private defense contractor, Raytheon, a corporation that is a primary climate engineering entity. This means that the weather forecasts are now the "scheduled" weather. Why don't employees of NOAA and NWS speak out about the climate engineering insanity? Because all the employees of both agencies have a federal gag order on them. The NOAA (National Oceanic and Atmospheric Administration) extended temperature forecast map for November 6-10 is below. 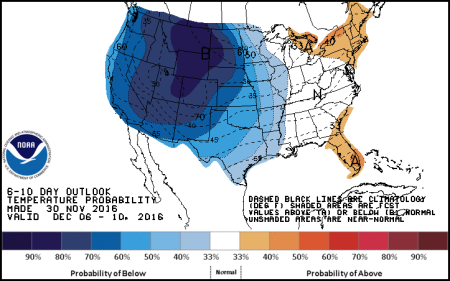 The ongoing geoengineered cool-down is then "forecast" to center almost directly over the Dakota protests (shown in the NOAA map below). Again, it is important to understand and remember that engineering snowstorms is a well established technology that has long since been admitted to by mainstream sources. 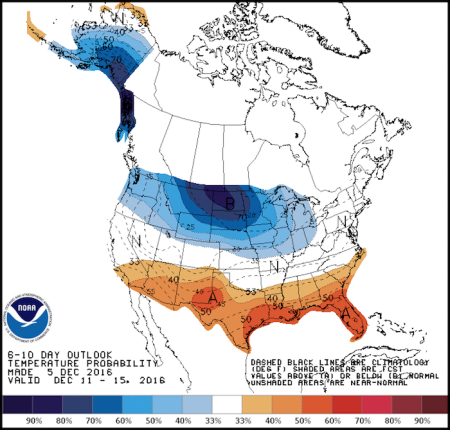 The center of the cold zone in the US has remained astoundingly centered over the Dakota water protecter region as the 3rd NOAA "departure from normal high temperature" map below reveals. 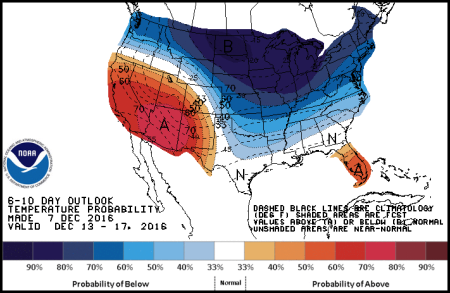 The NOAA map above shows continued predictions for record cold temperatures at or near the Dakota pipeline protest for yet another 6-10 day period.  Also anomolous in the latest forecast map is the building heat dome in the US southwest. Climate enigneerign is greatly contributing to increasingly alarming extream temperature imbalances. Each color tear represents a 2-3 degree departure from normal high temperatures. The NOAA extended forecasts temperature predictions from late November were for the middle northern tear states to be at or near record high temperatures, what changed? The US military industrial complex has long since stated its desire to "own the weather" on the record, now they do. If you don't think that the order followers within the ranks of own government and military would carry out such toxic and deadly experimentation/assaults against US citizens, think again.

Why would the global power structure go to such lengths in the attempt to bring the Dakota pipeline protests to end? Because the Dakota protests represent the rapidly growing will and unity of the people to take a stand against the criminal corporate and government tyranny that has completely taken over our country. The power structure will clearly do anything they can get away with to crush this all important protest. We must not let this happen. GeoengineeringWatch.org is working directly with representatives from the protest to test samples of precipitation and aircraft aerosol spraying that has taken place at the protest site. All of us are needed in the critical battle to sound the alarm on what is occurring at the Dakota protest, share credible information, wake others up to the truth, make your voice heard.
DW