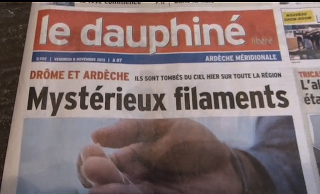 Tuesday, November 19, 2013
http://conspiracionglobal20.blogspot.com/2013/11/chemtrails-nuevos-analisis-en.html
Google Chrome for translation: http://translate.google.com/
Samples collected from individuals, entrusted to Analytika (Center for Independent Research and Expetises Organic Chemistry, located in Cuers, Var, France). Evidence was such that a French local newspaper picked it up in one of their publications.
The report recently published by Analytika analysis provides scientific evidence of anthropogenic origin of these filaments.Among the many various known organic compounds are detected in the composition of fuels and lubricants for aircraft engines molecules, including several phthalates , “endocrine disruptors”.
Drôme and Ardèche: Mysterious Filaments fallen from the sky “Reliable Explanation”

Tailliez Bernard, founder and scientific director of Analytika, concerned that its investigations reveal the existence of a new form of pollution directly attributable to air traffic air. The scientific community and relevant authorities are now alerted. Must quickly improve their knowledge about the origin and consequences, health and climate of this new form of air pollution and publish their findings because: “ The filing requirement entitles know . “(Jean Rostand)gives Analytika thank the association ACSEIPICA and citizens who participated in sample collection and research, without a commitment as a citizen the subject matter would not have attracted the attention of the authorities. 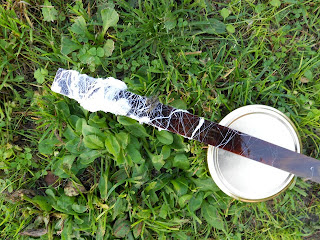 In France it is reported through the streets:

In recent months they appear analysis of water, soil, blood and polymers: Analysis of water and soil carried on a farm on the outskirts of Lisbon – Portugal
Josefina Fraile , president of Earth SOStenible and member of the Spanish Association of Clean Sky, is involved in a TV show: