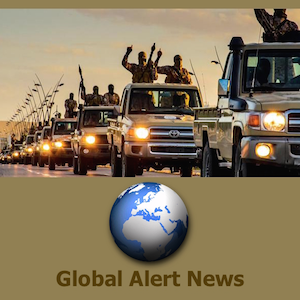 What isn't the power structure controlled western media propaganda machine telling you? Did the US corporate media ever mention that the plans to topple Iraq and a half dozen other Middle Eastern countries was in place just over a week after the 911 catastrophe? Was this Zbigniew Brzezinski's "grand chessboard" strategy being carried out? Is it just a coincidence that all of these countries were subjected to catastrophic drought leading up to their destabilization? Was this intended weather warfare? A 750 page congressional report confirming US involvement in massive climate modification programs has just been located and posted. Why did the US government supply ISIS their fleets of Toyota trucks through a third party? Why did the US just airdrop 50 tons of ammunition and weapons into Syrian rebel territory which will most certainly also end up in the hands of ISIS? Is ISIS actually an orchestrated tool for the power elite who are pursuing the "full spectrum dominance" of our planet? Is the US government/military industrial complex lashing out at Russia's attacks on ISIS due to all the factors just cited? Are they demonizing Russia because their military is actually trying to stop ISIS expansion? How did Saudi Arabia (the beheading capital of the world) just get appointed to lead the UN human rights council? Oil, power, and control, these factors are the bottom line for the criminal cancer that currently rules the world. The noose is being tightened around our collective necks, events around the globe are all connected. From the catastrophic climate modification assault occurring over our heads to the US government funding of terrorists, the backlash is building on all sides.
Dane Wigington
geoengineeringwatch.org