Is The Whole Solar System Warming? No 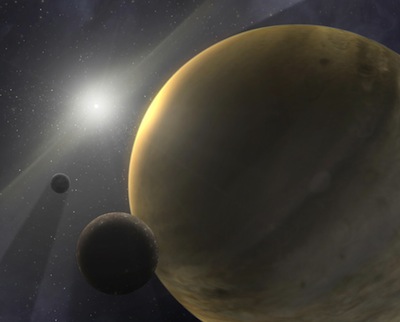 What Climate Change Is Happening To Other Planets In The Solar System?

Other planets are warming
"[E]vidence that CO2 is not the principle driver of warming on this planet is provided by the simultaneous warming of other planets and moons in our solar system, despite the fact that they obviously have no anthropogenic emissions of greenhouse gases.

Mars, Triton, Pluto and Jupiter all show global warming, pointing to the Sun as the dominating influence in determining climate throughout the solar system." (Ian McClintock)

This argument is part of a greater one that other planets are warming. If this is happening throughout the solar system, clearly it must be the sun causing the rise in temperatures – including here on Earth.

It is curious that the theory depends so much on sparse information – what we know about the climates on other planets and their history – yet its proponents resolutely ignore the most compelling evidence against the notion. Over the last fifty years, the sun’s output has decreased slightly: it is radiating less heat. We can measure the various activities of the sun pretty accurately from here on Earth, or from orbit above it, so it is hard to ignore the discrepancy between the facts and the sceptical argument that the sun is causing the rise in temperatures.

But if the sun’s output has levelled off or even diminished, then what is causing other planets to warm up? Are they warming at all?

The planets and moons that are claimed to be warming total roughly eight out of dozens of large bodies in the solar system. Some, like Uranus, may be cooling. All the outer planets have vastly longer orbital periods than Earth, so any climate change on them may be seasonal. Saturn and its moons take 30 Earth years to orbit the Sun, so three decades of observations equates to only 1 Saturnian year. Uranus has an 84-year orbit and 98° axial tilt, so its seasons are extreme. Neptune has not yet completed a single orbit since its discovery in 1846.

This is a round-up of the planets said by sceptics to be experiencing climate change:

Claims that solar system bodies are heating up due to increased solar activity are clearly wrong. The sun’s output has declined in recent decades. Only Pluto and Neptune are exhibiting increased brightness. Heating attributed to other solar bodies remains unproven.

4 Responses to Is The Whole Solar System Warming? No