One More Toxic Blow To California 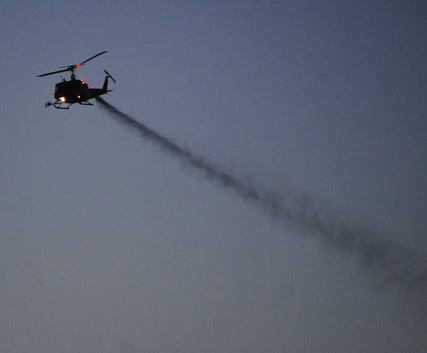 As if things in California are not bad enough already, now another program of toxic insanity is added to the mix. On top of the horrific highly toxic drought inducing spraying from the ongoing climate engineering programs, and the poisoning of California’s remaining ground water with the toxic industrial waste injection wells, now the whole State is being lined up for yet another layer of toxic pest spraying. How much contamination can ecosystems take before nothing is left alive? In the last ten years the terrestrial and aquatic insect populations in Northern California’s Shasta and Siskiyou Counties have already declined some 90% as measured by former USFS biologist Francis Mangles who has done such monitoring for over 30 years. The die-off appears directly related to the toxic metal and chemical fallout from the totally out of control climate modification spraying programs. Already there are almost no insects for birds, bats and fish to eat. Now the State of California is going to kill off what little is left with yet more chemical spraying which will also rain down on an unsuspecting population. We are all passengers on a runaway train of total insanity. It’s not just the power structure that is to blame but also each and every individual that has allowed things to get this bad. Even more blame should be laid on all those that are carrying out the orders of the power structure in exchange for a paycheck. It’s up to us, the population, to hold these people responsible. This means turning off the football games and “American Idol” in order to engage in the fight for the common good. The paradigm we have all known is in its death throes, it’s over and it’s not coming back. If we are to have any life left on our planet to pass on to our children we must all act now, not later. Tomorrow is too late, we have only today. The latest ecocide program to be implemented by the state of California (and the federal power structure that orchestrates the state) is below, I am grateful to my friend Rosalind Peterson for bringing this latest spraying program to my attention.
Dane Wigington
geoengineeringwatch.org

CDFA is mandated to prevent the introduction and spread of injurious insect pests, plant diseases, and noxious weeds in California. To accomplish this, CDFA implements the Statewide Plant Pest Prevention and Management Program (Statewide Program), an ongoing effort by CDFA to protect California’s agriculture from damage caused by invasive pests and plant pathogens. The Statewide Program is implemented in partnership with a number of different entities, including international trading partners, the US Department of Agriculture, County Agricultural Commissioners, other public agencies, industry groups, and academia.

CDFA has prepared this Draft Program EIR to provide an up-to-date, transparent, and comprehensive evaluation of CDFA’s activities. Once certified, the PROGRAM EIR will serve as an overarching CEQA framework for efficient and proactive implementation of Statewide Program activities. As part of this, CDFA plans to implement a CEQA Tiering Strategy (Appendix B), a checklist tool and guide for project-level CEQA compliance and integration of new pest programs and management approach. The Statewide Program activities as they are described in this PROGRAM EIR are referred to as the “Proposed Program.”

CDFA issued a Notice of Availability (NOA) to provide agencies and the public with formal notification that this Draft PROGRAM EIR became available for review on August 25, 2014. The NOA was sent to all responsible and trustee agencies, any person or organization requesting a copy, and county clerks for posting in addition to county agricultural commissioner offices. The notice was published in general-circulation newspapers and CDFA submitted the NOA and a Notice of Completion (NOC) to the State Clearinghouse.

Publication of the NOA triggered a 45-day public review period beginning Monday, August 25, 2014. In response to public requests, the comment period was extended through October 31, 2014. During this time, CDFA will receive and collate public and agency comments on the Proposed Program and the Draft PROGRAM EIR. Please note public review period extension under “How to Comment.”

All interested persons are encouraged to attend the public meetings to present written and/or verbal comments on the PEIR. Five public meetings will be held throughout the State from September 22 thru September 30, 2014. Locations, dates and times are provided in the Notice of Availability and under Public Hearing locations.

PUBLIC REVIEW AND COMMENT PERIOD: Based on requests from members of the public, the PEIR public review period has been extended through 5 p.m. on October 31, 2014.

Please send comments on the PEIR at the earliest possible date, but postmarked no later than 5 p.m. on October 31, 2014 in order for your comments to be considered.

Written comments may also be submitted by email to: PEIR.info@cdfa.ca.gov. Emailed comments are preferred, and should include your name, address, and daytime telephone number so a representative of CDFA can contact you if clarifications regarding your comments are required.

All comments received, including names and addresses, will become part of the official public record. A Final PEIR will be prepared which will include responses to comments received during the public review period.

Official comments on the PEIR are accepted by email or mail only.

20 Responses to One More Toxic Blow To California