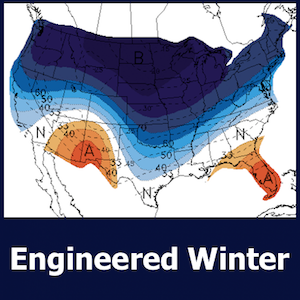 Global climate engineering programs are not a proposal, but have long since been a lethal reality. "Winter Storm Decima" is bearing down on the US, but is this storm truly a natural weather occurrence? Will the hyped headlines on this event tell the real story of the global climate picture? An examination of the latest "Temperature Departure From Average" map below very clearly reveals where it is cool, and where it is not. The rapid heating of the polar regions continues to accelerate (as is the overall heating of the planet), but key western power population centers are miraculously cool. How can this be? Why does mainstream media exclusively cover the cool zones (with enthusiastic theater-like portrayals) while at the same time completely ignoring temperatures in the Arctic that have recently been almost 60 degrees ABOVE NORMAL? 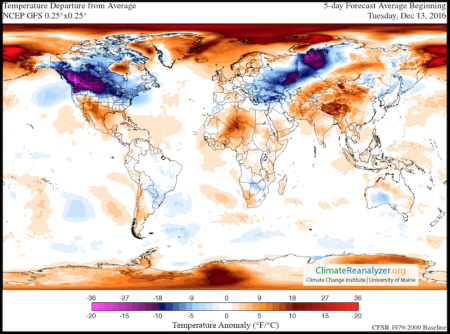 The chemically ice nucleated cool-down focus zones are very visible in the global "temperature departure from average" map above. The extremely anomalous cool zones (in a record warm world) are located in regions which provide the headlines of "dangerous cold" that power structure controlled western media sources like The Weather Channel are paid to hype.

There are many agendas being carried out in our skies by the completely out of control power structure, none of those agendas are benevolent or for the common good. One of the primary objectives of the climate engineers is to keep the first world populations of western nations confused and divided as to the true condition of the overall global climate. Keeping the masses oblivious and bewildered in regard to what is unfolding until the last possible moment is a key aspect of power structure planning. The weather makers are desperately trying to engineer winter with unimaginably extensive atmospheric manipulation/geoengineering processes (which includes chemical and/or biological ice nucleation agents as a primary element). If you don't think water (cloud moisture) can artificially be chemically ice nucleated, think again. The Chinese government openly announced that they were engineering snowstorms. Engineered snowstorms are wreaking havoc around the globe. The two very short videos of lab tests below are examples of chemical and biological ice nucleation.

When the climate engineers seed storm clouds (via jet aircraft spray dispersions) with chemical or biological ice nucleating elements, precipitation that falls often reaches the surface before setting up and freezing. The geoengineers are becoming increasingly aggressive with the use of chemical ice nucleation in a desperate attempt to create short term (toxic) cool-downs. 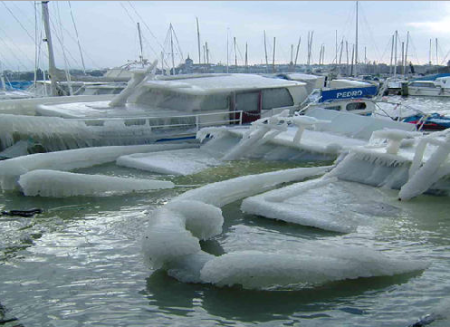 In recent years freak ice storms have become the norm. Ice storms are occurring even in coastal zones with oceans that are at record warm temperatures. ​

The short weather radar map below should be examined carefully. Rain cells that are in far above freezing air masses can be observed anomalously "changing over to snow". This is a recently coined phrase that has now been adopted by many "forecasting" (scheduled weather) agencies. 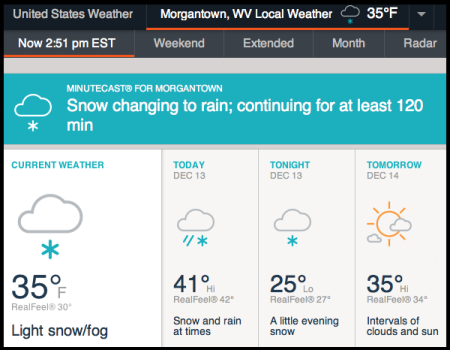 The highly toxic short term engineered cool-downs come at the cost of an even worse overall planetary warming, this includes the Earth's oceans.  Sea surfaces are also being chemically nucleated in the polar regions. 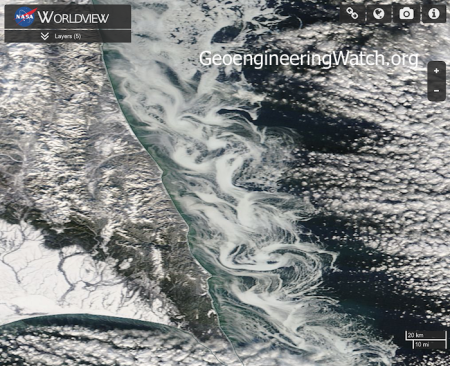 The extremely anomalous sea ice formations along the polar shoreline shown above are a harbinger of aggressive chemical ice nucleation programs being carried out by the climate engineers.

Global sea ice volume (mass) is declining rapidly as shown in the graph below. 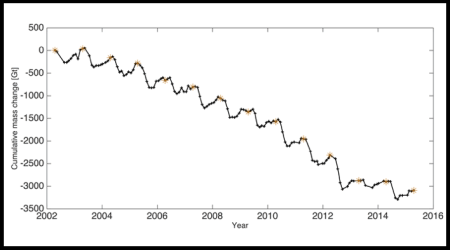 The plummeting sea ice levels are of grave concern, but there is very little media coverage of what is unfolding at the poles.

The thinning of sea ice is especially profound in the Arctic. As the melting of polar ice accelerates, the Arctic could be ice free by next year, the summer of 2017. The desperate attempts of the climate engineers to mask the unfolding reality is only greatly exacerbating the overall climate and biosphere implosion. 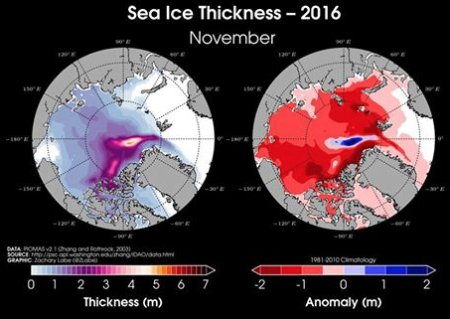 Arctic sea ice volume (mass) is seldom referred to by "official" sources for a reason, ice mass has crashed and is still declining. Massive sea floor methane deposites in the Arctic are also thawing and releasing into the atmosphere.

Climate ​engineering has also greatly contributed to exponentially increasing forest fires around the globe. The atmospheric soot and ash from these fires settles down on ice deposits making them darker and thus more prone to absorb solar energy. 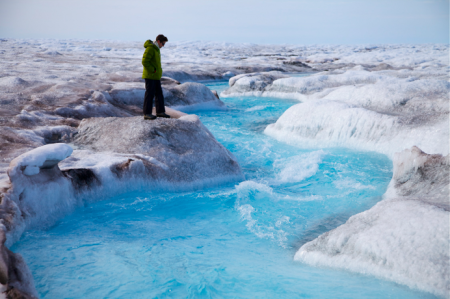 The west coast satellite animation below was captured as "Winter Storm Decima" began to hit the US west coast on Tuesday, December 13, 2016. The flow of relatively warm moisture from the Pacific can clearly be seen "changing over" to snow over large regions for no logical reason as the incoming flow of Pacific moisture was not cold enough. Also of note in the satellite loop below is the anomalous precipitation-free zone that is around the Eureka region of the California coast. Precipitation flows toward this zone, stops, and then continues farther to the north east. With careful observation of the animation below, a microwave transmission location can be deciphered southwest of Eureka (these transmissions are part of the climate engineering process). A very high percentage of the moisture flowing over California (and the west) is heavily sprayed with atmspheric aerosols which effectively keeps much of the moisute from falling. The aerosol saturation contribues to vast expanses of largely precipitationless cloud cover. This helps the climate engineers to migrate available moisture further inland where they can continue the chemical ice  nucleation cool-down process. Additional seeding of the clouds with larger condensation nuclei further inland can bring the migrating moisture down in the location of choice for the climate engineers.

The satellite/radar image below shows the earlier mentioned microwave transmission source (southwest of Eureka) with much more clarity. 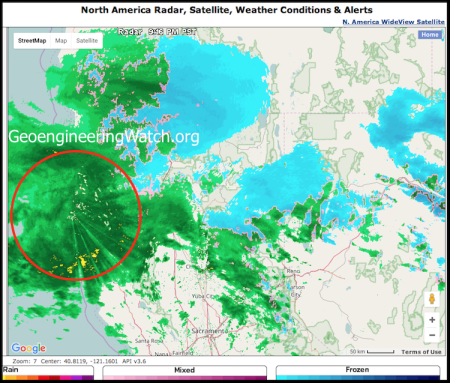 Anomalous "ice balls" have been washing up on shores all over the globe in recent years. Often these "ice balls" appear on bodies of water that are far above the freezing point, why? It is a result of chemical ice nucleation elements. This type of artificially nucleated material can also remain "frozen" in astoundingly high temperatures. 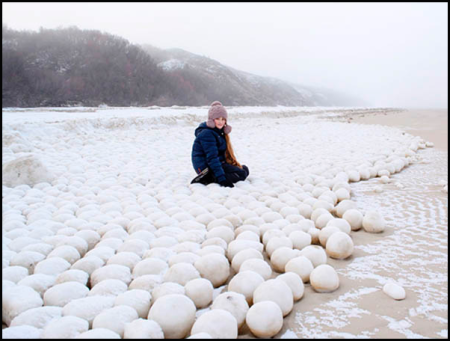 So, how cold is the start of "WInter Storm Decima"? Not so much. Warm moisture off the Pacific is nucleated as it heads inland. An "ice storm" zone exists in the transition zone between the warmer moisture and the chemical nucleated storm interior. 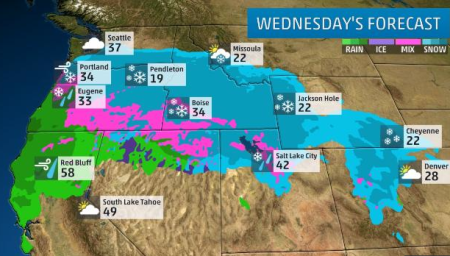 How cold will the end of "Winter Storm Decima" be? Outside of the chemically nucleated jet stream manipulated interior of the "storm", not very cold. Again, there are large "ice storm" zones predicted (from the chemically nucleated precipitation) in the transition zones between the warmer moisture flows and the interior sections of the "storm". Why are there "icy" zones predicted in regions with such high temperatures in the "forecast"? 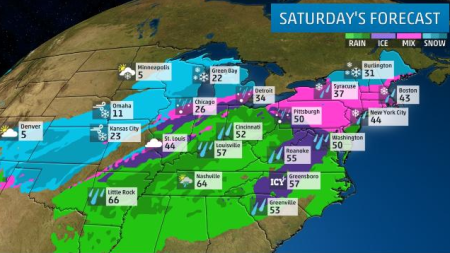 It is essential to understand the full arsenal of climate engineering weapons that are being implemented against unsuspecting populations. Chemically nucleated engineered cool-downs and snowstorms are a primary aspect of the global climate engineering onslaught. Climate engineering will continue to fuel ever more abrupt and radical "wheather whiplash" events all over the world. Help us to expose and halt the insanity, make your voice heard.
DW