Climate Geoengineering – The Secret Spraying Of Our Skies 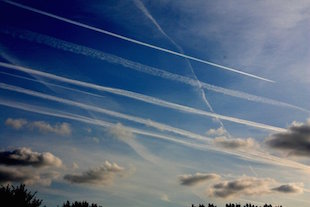 For decades now, and largely in secret, the US military-industrial complex has been engaged in the systematic “spraying” of large swaths of our sky in one of the largest and least-discussed global planetary experiments in human history, reports Jeremy Schulman for Grist magazine.  When human observers on the ground make it a point to “look up” and study our heavens, they witness strange anomalies beyond simple and expected patterns traditionally made by water vapor ice crystals or typical commercial airline traffic.  Instead, critical observers witness a variety of spray patterns: parallel lines, crosshatch lines, X, O, or U turn lines, even circular shapes. These spray patterns possess two unusual behaviors: they stay visible for lengthy periods of time, and they slowly spread out across significant sections of our sky, often for hours at a stretch.

These observed persistent ‘contrails’ are visible for several hours – and evidence suggests the contrails are aerosol sprays of metal oxides meant to reflect incoming solar thermal energy so as to cool the Earth by 1-2% and offset the greenhouse effect of increasing atmospheric CO2. (Note: the Internet is full of disinformation sites on this issue, and consulting these can make the unwary researcher doubt his own eyes and mind.) The “spraying” patterns reported by observers for more than 15 years have characteristics that contradict disinformation sources (official and unofficial). To wit, typical commercial flight patterns differ from these oft-witnessed heavy spray trail patterns in at least three distinct ways: 1) commercial airlines don’t go East-West and North-South in the same patch of sky; 2) commercial airlines do not fly in patterns that make X, U or 0 shapes; 3) commercial airlines do not fly heavily one day and not at all the next.

What’s in these sprays in our skies—and are they toxic? Global scientific data collection paints a picture of a multi-year systematic effort to engage in “climate geoengineering” through this spraying program, with troubling environmental consequences. For example, post-spray rainwater tests made in Canada, the United States, Europe, and New Zealand reveal the presence of aluminum, barium, strontium, and other heavy metals in varying amounts that are unsafe, often radically so, according to various official criteria (EPA, US states, Canadian provinces, UN, etc.). Numerous U.S. patents from the mid-1970s to the present, meanwhile, confirm the aerospace industry and the U.S. military’s high level of interest in aerosol spray technology, including electromagnetic technology, as well as an interest in specific metals/chemicals/oxides and their requisite particulate sizes. The problem with aerosol sprays is that what goes up comes down, either in months or in one to two years. When these sprays fall to earth, they are invisible and easily penetrate deep into human tissues as they are breathed, drunk, and eaten in food grown in heavy-metal-laced soils toxic to life. Citizens in various communities worldwide have organized hearings and protests and submitted petitions to government officials requesting clarification about what’s being sprayed on them and also to demand such spraying cease and desist. These communities include: Victoria, BC and Espanola, ONT; Shasta, CA; Suffolk County, NY; and Aigina, Greece.

What is so surprising about this climate geoengineering story is the almost-complete corporate news blackout regarding it, particularly given the massive amount of visual evidence available on the Internet. Independent media coverage of this story is robust. For a diverse array of recent stories, see George Barnes’ 2014 documentary, “Look Up!“; whistleblower Kristen Meghan’s interview, Michel Chossudovsky’s Global Research website; and a revealing exchange between influential climate geo-engineer David Keith and Geoengineering Watch founder Dane Wigington.

50 Responses to Climate Geoengineering – The Secret Spraying Of Our Skies