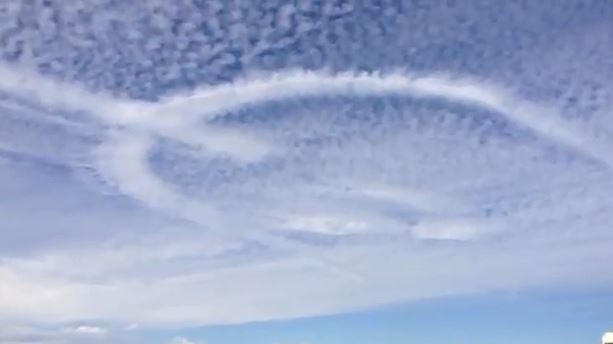 If you look up, and start paying attention to the sky, you’ll begin to notice that there are things taking place that are clearly unnatural. Here is a good example.

It would appear this high frequency electromagnetic pulse is done to “heat” the atmosphere above each station …. possibly to create an “artificial ionospheric mirror = AIM” WITHIN THE ATMOSPHERE, maybe to have some other yet unknown effect OTHER than weather modification, or these pulses could quite possibly be done for the sole purpose of engineering the weather.

Also, it has been discovered that a global campaign is underway, to spray particulate matter into the air .. via aircraft distribution .. in order to aid in frequency propagation and transmission… substances like Aluminum, Barium, Strontium, and Silver Iodide (just to name a few). Commonly called “chemtrails” this “cloud seeding” is picking up in pace.

1. Flashes into the high RF appear on RADAR — sometimes in the same geometric modulation patterns spoken about in HAARP research papers… they appear coordinated with other stations, and not all stations in the same area produce the flash.

2. SEVERAL times, too often to be a coincidence….we see severe weather (tornadoes , damaging winds, and hail) hit these frequency flash epicenters. This usually occurs within 48 hours of the high frequency being emitted from the ground based station (usually a ground based NEXRAD RADAR or similar produces the pulse).

I believe this pulsed heating, done from the ground based stations, is INDUCING or ACCENTING current coming storm systems. The energy pulses may even DRAW the coming yet-unformed storm systems to each station emitting a “Circle Sweep / HAARP ring”.

It also would appear that the “geometric modulations” [circle sweeps/haarp rings/sawtooth sweeps/scalar squares] are done to increase the amplitude of the signal being emitted.

Whatever the frequency is.. its showing as a quick flash into the high RF.. and as the flash intensity increases .. so does its geometric modulation appearance on the screen — ultimately the higher and more frequent the flashes = the stronger and longer lasting the storm that comes to the flash.

You can read below about the Fourier heat dissipation analysis. The square , rectangle, sawtooth, and circle sweeps can be explained in the Stanford VLF geometric modulation papers.read more…