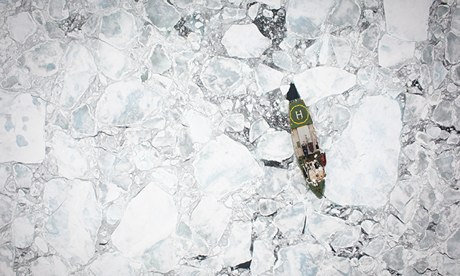 Is conventional modelling out of pace with speed and abruptness of global warming?

Greenpeace icebreaking ship, Arctic Sunrise, among broken floes of Arctic sea ice, photographed from the air. This image was taken in the Fram Strait, in the month that the sea ice coverage receded to the second lowest extent since records began. Photograph: Nick Cobbing
An ongoing US Department of Energy-backed research project led by a US Navy scientist predicts that the Arctic could lose its summer sea ice cover as early as 2016 – 84 years ahead of conventional model projections.

The project, based out of the US Naval Postgraduate School’s Department of Oceanography, uses complex modelling techniques that make its projections more accurate than others.

A paper by principal investigator Professor Wieslaw Maslowski in the Annual Review of Earth and Planetary Sciences sets out some of the findings so far of the research project:

“Given the estimated trend and the volume estimate for October–November of 2007 at less than 9,000 km3, one can project that at this rate it would take only 9 more years or until 2016 ± 3 years to reach a nearly ice-free Arctic Ocean in summer. Regardless of high uncertainty associated with such an estimate, it does provide a lower bound of the time range for projections of seasonal sea ice cover.”

The paper is highly critical of global climate models (GCM) and even the majority of regional models, noting that “many Arctic climatic processes that are omitted from, or poorly represented in, most current-generation GCMs” which “do not account for important feedbacks among various system components.” There is therefore “a great need for improved understanding and model representation of physical processes and interactions specific to polar regions that currently might not be fully accounted for or are missing in GCMs.”

According to the US Department of Energy describing the project’s development of the Regional Arctic System Model (RASM):

“Given that the Arctic is warming faster than the rest of the globe, understanding the processes and feedbacks of this polar amplification is a top priority. In addition, Arctic glaciers and the Greenland Ice Sheet are expected to change significantly and contribute to sea level rise in the coming decades.”

The regional focus of RASM permits “significantly higher spatial resolution” to represent and evaluate the interaction of “important fine-scale Arctic processes and feedbacks”, such as:

The role of the Department of Energy in backing the research is not surprising considering that President Obama’s national Arctic strategylaunched in May is focused on protecting commercial and corporate opportunities related to control of the region’s vast untapped oil, gas and mineral resources.

The model coheres with the predictions of several other Arctic specialists – namely Prof Peter Wadhams, head of polar ocean physics at Cambridge University and Prof Carlos Duarte, director of the Ocean Institute at the University of Western Australia – who see the disappearance of the Arctic sea ice in the summer of 2015 as likely.

Prof Wadhams is co-author of the controversial Nature paper which calculated the potential economic costs of climate change based on a scenario of 50 Gigatonnes (Gt) of methane being released this century from melting permafrost at the East Siberia Arctic Shelf (ESAS), a vast region of shallow-water covered continental crust. The scenario was first postulated by Natalia Shakhova and Igor Semiletov of the International Arctic Research Centre at the University of Alaska, Fairbanks.

In 2010, Shakhova’s team published results showing that 7 teragrammes of methane was bubbling to the surface annually in the ESAS. Last month, she released a new paper in Nature Geoscience updating these findings on the basis of more rigorous measurements using an unmanned underwater vehicle with advanced sonar capability. She found that annual bottom water temperatures have increased over the last 14 years, correlating with a release of about 17 teragrammes of methane a year, accentuated by storms. This conservative estimate is more than double the earlier assessment.

However, the source of these methane emissions remains a matter of dispute, as other scientists investigating the phenomenon point out that while large deposits of methane hydrates could be breaking up, the other possibility is a slow leak of methane that has already gone on for hundreds of years. Christian Berndt, of the GEOMAR/Helmholz Centre for Ocean Research, has speculated that both phenomena could be going on at once, but he admits, “We have no proof.”

Despite their latest study uncovering higher levels of methane than previously recognised, Shakhova has also distanced herself from the ‘methane bomb’ scenario she had once previously posited, noting a lack of direct evidence for the scenario.

Commenting on the study, the US National Snow & Ice Data Centre(NSIDC) observes:

“Ship-based observations show that methane concentrations in the air above the East Siberian Sea Shelf are nearly twice as high as the global average… Layers of sediment below the permafrost slowly emit methane gas, and this gas has been trapped for millennia beneath the permafrost. As sea levels rose at the end of the ice age, the shelf was once again covered by relatively warm ocean water, thawing the permafrost and releasing the trapped methane… In the short-term… methane has a global warming potential 86 times that of carbon dioxide.”

Most scientists agree that more research is needed to determine the source and nature of these methane emissions.

But scientists also largely agree that an ice free Arctic in the summer could have serious consequences for the global climate. Some research has pointed out a link between the warming Arctic and changes in the jet stream, contributing to unprecedented weather extremes over the last few years. These extreme events in turn have dramatically impacted crop production in key food basket regions.

A landmark new study in Nature Climate Change finds the melting of the sea ice over the last 30 years at a rate of 8% per decade is directly linked to extreme summer weather in the US and elsewhere in the form of droughts and heatwaves. Lead study author Quihang Tang at the Institute of Geographic Sciences and Natural Resources Research in Beijing said:

“As the high latitudes warm faster than the mid-latitudes because of amplifying effects of melting ice, the west-to-east jet-stream wind is weakened. Consequently, the atmospheric circulation change tends to favour more persistent weather systems and a higher likelihood of summer weather extremes.”

The new study supplements earlier research published in Geophysical Research Letters demonstrating a link between Arctic sea ice loss and extreme weather particularly in both the summer and winter, including prolongation of “drought, flooding, cold spells, and heat waves.”

Last year Prof Duarte was lead author of a paper in the Royal Swedish Academy of Science’s journal AMBIO warning that the Arctic was at risk of passing critical “tipping points” that could lead to a cascading “domino effect once the summer sea ice is lost.” Prof Duarte said at the time:

“If set in motion, they can generate profound climate change which places the Arctic not at the periphery but at the core of the Earth system. There is evidence that these forces are starting to be set in motion. This has major consequences for the future of human kind as climate change progresses.”