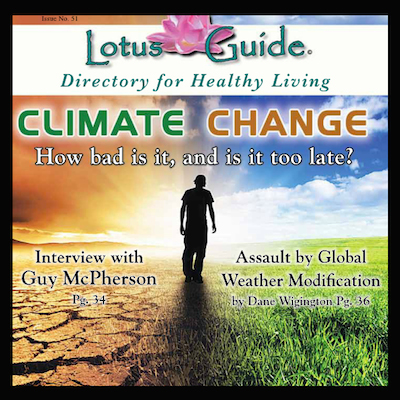 My thanks to the editors of “Lotus Guide” (a Northern California magazine) for their courage in addressing the dire threat posed by our collapsing biosphere and also for helping to expose the climate engineering factor in this equation.
Dane Wigington
geoengineeringwatch.org

Note from Lotus Guide: It’s difficult to cover subjects such as this because so many of us simply don’t want to know and would rather watch Dancing with the Stars or American Idol. So this is for you spiritual warriors who have gone beyond fear and into the realm of realizing that life is an extreme adventure and we all have the power to manifest a better world… if, and we do mean “if,” we know the facts and aren’t buried in the illusion of unconsciousness that is promoted by the entertainment industry and the corporate media. Every great book, movie, myth, or story ever told has a hero that had shortcomings and/or fears that held him or her back from vanquishing the nemesis in the story. Overcoming our fears and looking in the face of what threatens us is what makes us the hero of our own life story. For far too long ‘we the people’ have stood by meekly watching sociopaths take office and control our world in ways we can hardly grasp. Joseph Campbell said a “Hero Has A Thousand Faces”, but I say a hero has billions of faces.

What Major Factor Causing “Climate Change” Are They Not Telling Us About?

More alarming articles and studies are surfacing each day that confirm the rapidly changing state of Earth’s life-support systems and climate. Humanity has damaged the planet and the chickens are coming home to roost. Though there certainly are many parts to this unfolding story, the largest piece of the puzzle by far still goes completely unacknowledged by most of the scientific community and all of the mainstream media/corporate/military/industrial complex. The massive elephant in the room has been, and still is, “stratospheric aerosol geoengineering” or “SAG,” aka “chemtrails.”

What Is Stratospheric Aerosol Geoengineering and Why Is It So Dangerous?

Stratospheric aerosol geoengineering is a primary term for the ongoing global climate-modification programs being conducted by major powers around the world. “Aerosols” is simply a term for a microscopic particle that is suspended in the air. The major component of the geoengineering programs is to saturate the atmosphere by spraying millions of tons of 10 nanometer (a nanometer is 1/1,000,000,000, or one billionth, of a meter) toxic metal particles (aerosols) from jet aircraft. Why? Based on available data, there are a number of known objectives, though it is very likely much of the agenda associated with these programs can only be speculated on.

Many geoengineering patents have a stated goal of slowing global warming. Aluminum/alumina, among other toxic metals, is showing up in countless rain tests around the world. The amount of aluminum, barium, and other metals in these rain/snow tests is always high and often completely off the charts. Snow tests from Mount Shasta in Northern California were toxic beyond belief. This area of the Pacific Northwest was thought to be a pristine water source. Dozens of rain samples taken in this region from numerous individuals were tested at the state-certified lab in Northern California and without exception showed shocking results. Former U.S. Forest Service biologist Francis Mangles has confirmed the alarming heavy metal contamination with his own testing. Snow tests taken from the side of Mount Shasta showed aluminum content as high as 61,000 parts per billion (ppb). This level of aluminum in the snow is tens of thousands of times anything that might be considered “normal background” contamination.

Aluminum is the primary element named in numerous geoengineering patents—the same patents that describe dispersing this aluminum from jets for the expressed purpose of blocking the sun, which is exactly what we see aircraft “trails” doing in our skies day in and day out.

It is important to remember that this contamination is not local but global in scope. Movements that are desperately trying to address this dire issue have formed in countries all over the world.

Ocean current changes are already delivering warmer waters to regions with vast undersea methane deposits. These deposits are known as “methane hydrate” deposits and literally hold life on Earth in the balance. Many regions around the globe are beginning to expel methane from hydrate and clathrate deposits. The East Siberian Shelf of the Arctic is already releasing en masse. All available data indicate that this event alone is changing our biosphere by the day. Though groups of scientists such as the Arctic Methane Emergency Group (AMEG) are calling for “emergency wartime scale geoengineering to avert planetary catastrophe,” available data indicate that the very geoengineering programs that they are selling as a cure are more likely a major causal factor in triggering the methane catastrophe in the first place. The fully deployed planetary geoengineering programs have been altering wind and rain patterns at an ever-increasing level for decades.

Saturation of the atmosphere with methane is equivalent to covering the planet with a sheet of glass. The sun’s thermal energy gets in, but it does not get out. Though most articles on methane release state methane to be 20 times more potent a greenhouse gas than CO2, this is over a 100-year horizon. Over a 10-year horizon, methane is at least 100 times more potent. In addition to the atmospheric damage caused by the methane release, there is also ocean acidification. As the methane migrates from the sea floor to the surface, much is dissolved into the water. Oceans are currently acidifying at an extremely alarming rate. Again, the consequences of methane release alone threaten all life on Earth.

Inhalation of microscopic particulates is highly damaging no matter what the particulate material. Respiratory ailments and mortalities are now literally epidemic. Degenerative human diseases that are linked to heavy metal exposure are even more lethal and are now going virtually off the charts. Attention-deficit disorder (ADD), Alzheimer’s, autism, acute lymphoblastic leukemia (ALL), immune dysfunction, and many other diseases associated with heavy metals have all skyrocketed in recent years. According to scientists such as internationally known neuroscientist Russell Blalock, the heavy-metal nano particles are so small that they pass right through the lung lining into the bloodstream. There they can adhere to cell receptors like a plaque, slowly but surely shutting down bodily functions and the immune system. These metals are all but impossible to remove once they have become lodged in the body. In addition, virtually every bite we eat is now contaminated with these toxic nano particles as they are absorbed by plant life, which is highly damaging to crops.

Stratospheric aerosol geoengineering (aka chemtrails) has now tainted all. Every breath we take, every bite we eat, all are contaminated. A mountain of data, studies, and testing confirms this conclusion beyond reasonable doubt.

We are all quite literally under assault. The threat to all life on Earth from the global weather-modification programs cannot be overstated. It is up to all of us to help in the task of bringing these programs to light and to a halt so the planet can begin to recover. It is likely that the vast majority of military and private-sector people involved with geoengineering do not understand the consequences.

Time is not on our side. Every day that global geoengineering continues, our odds are diminished. We must all pull together in the effort to shine the light on this greatest of all human crimes. Once the geoengineering issue is truly out in the open, and those who physically carry out the spraying realize what they are a part of, we have a chance to stop these lethal programs. 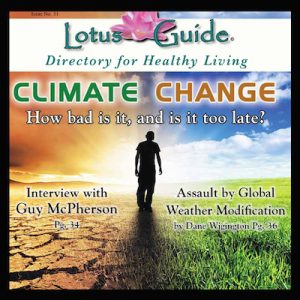