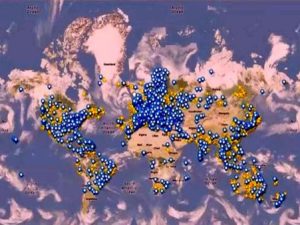 The ones who are a threat to the global elite get arrested, committed to psychiatric hospitals… or worse. I think this illustrates that geoengineering, HAARP, et al are not figments of the imaginations of ‘conspiracy theorists’.  ~ BP

Many in North America suffer through a “polar vortex,” 100,000 dead Bats fell from the Sky in Australia as the result of extreme heat.

For those who still believe that chemtrails and geoengineering the weather is just nonsense and merely a conspiracy theory, then take notice of the following story.

BRUSSELS – Melanie Vristchan, public information director of the European Coalition against Covert Harassment, describes how she was subjected to unlawful arrest and attempted psychiatric commitment only days after she was in contact with the Chairman of the Human Rights LIBE Committee of the European Parliament concerning EUCACH testimony regarding a proposed EU law to ban HAARP, chemtrails, and new physics implant mind control technologies.

Link: Statement of Melanie Vristchan on her arrest and attempted psychiatric commitment.

Melanie Vristchan on her arrest

Ask yourself, why would they arrest Melanie Vristchan and their attempt to place her in a mental institution if weather modification and its negative impact, is just a conspiracy theory.

Quote: Techniques for conducting secret warfare, of which only a bare minimum of security forces need be appraised… Techniques of weather modification could be employed to produce prolonged periods of drought or storm. Steve Quayle – Weather Wars and Un-Natural Disasters.

Definitely frequency/weather weapons being used on the general population of the planet Earth.