Geoengineering Climate Change, Is This How It Ends? 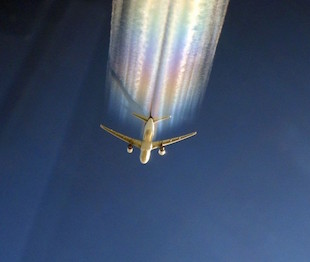 Hornby Island July 6, 2015  – Yesterday around 4 am, I awoke disturbed and opened my back door on an ominous orange sky. I'm either in an Alfred Hitchcock movie or it's the end of the world, I muttered.

Last evening down at the cove, shutterbugs snapped away with giant lenses at a fat red ball that looked more like Mars than the setting sun. And this morning, I awoke hacking and choking. The smoke streaming through an open window smelled like a big building burning right next door.

But there is no big building.

And it wasn't burning.

Even more unsettling, the usual daybreak cacophony of robins, ravens, eagles and crows was… silent.

The winged ones had fled.

I flipped on the laptop and booted up…

“A haze blankets the majority of people in BC,” Global News was reporting. Comparing square-kilometers, this is the same as saying, “a haze blankets most people in California, New Zealand and the UK.” [Global News July 6/15; BCRobyn.com] 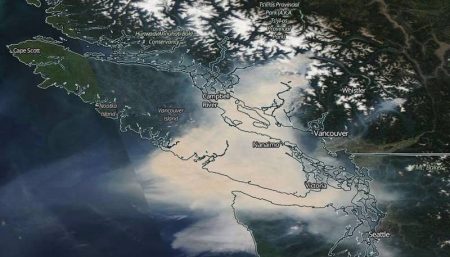 While I'd slept, across the Georgia Strait the Metro Vancouver Air Quality Health Index had gone to 10+ “Very High Risk”. Health officials are warning that secondhand wildfire smoke inflames lung and heart linings – and is especially dangerous for infants, the elderly and those who have diabetes, lung or heart disease. (Yikes! C'est moi!)

As my wounded ticker protests this latest insult, the Times Colonist confirms that wildfires burning throughout the province are increasing hospital admissions for cardiovascular symptoms. People with chronic medical conditions are being warned to avoid “strenuous exercise” and stay the heck inside. [Times Colonist July 5/15; Global News July 6/15; CBC July 6/15]

I shut the window, cranked the HEPA filter up high and popped another baby aspirin.

Several burning BC communities have declared states of emergency, which means the provincial government must borrow more money to pick up the tab. With climate events cascading, we know how this ends.

With most of British Columbia officially declared an “Extreme Fire Risk”, a province-wide ban on all fires, campfires, fireworks, torches, “exploding rifle targets” and similar shenanigans is in effect. The fine for violators is 100 grand. But at this point, anyone seen flicking a glowing butt towards the woods will probably be shot. And maybe not with a tranquilizer dart. [Vancouver Sun July 5/15]

A wildfire up north near Port Hardy is burning less than 300 metres from some evacuated homes. This is extremely weird. As a frequent visitor to “Port” informed me by phone, he's been there “maybe two days when it wasn't raining.” [CBC July 6/15]

But not recently. This “wet coast” town at the northern tip of Vancouver Island hasn't seen rain in two months. “People in the north island need to understand that we are in a very unusual place,” advises Port Hardy Mayor Hank Bood. “We’re not fooling around anymore.” [Canadian Press July 6/15]

“We’re in areas where we’ve never been before. We’ve never had a dry May and June like we’ve just had,” echoes North Vancouver Mayor, Darrell Mussatto. “We’re at record low inflows into our reservoirs.” [Global News July 6/15]

Can You Say British California?

This is the first weekend of enhanced water restrictions. The “Level 4” drought rating currently in effect for southern Vancouver Island and the Gulf Islands, means “water supplies are insufficient to meet the needs of communities and ecosystems.” Residents are required to try to cut their water use by an additional 20% over “regular” reductions. [CBC July 6/15]

There is no Level 5.

With nearly all of the lower mainland, most of Vancouver Island, and vast areas of northeastern and central BC now in extreme fire danger rating, it feels more like late-August 2030 than early July 2015.

Despite a massive weekend tourist blitz, at least this tinder-dry, 11 square-mile isle isn't burning yet. But with 178 total active wildfires on nearby Vancouver Island and the BC mainland, we are surrounded by burning forests and desiccated grasslands to our north, south and east. [Global News July 5/15]

According to the authorities, much of the smoke settling in the trees outside is coming from a wildfire burning in steep terrain and heavy timber near Pemberton. Tripling in size overnight, this 2,000-hectare fire “is displaying a vigorous and aggressive rate of spread, with periods of organized crown fire,” the BC Wildfire Management Branch reports. Crown fires spread flames from exploding tree top to tree top, igniting “spot fires” ahead of their advance. [CBC July 6/15]

Pemberton is 299 kilometers away.

Closer across the water, one firefighter has died fire-fighting in Sechelt, where the Shishalh Nation reports a spike in respiratory distress calls to emergency services. The 38-bed St. Mary’s Hospital is filled to capacity with health complications from smoke inhalation. [Global News July 5/15; Vancouver Sun July 5/15]

“It’s unusual for this time of year; there’s no relief in sight in the weather forecast. We’re expecting temperatures in the mid-30s [C], and absolutely no rain forecast in the near future. That’s definitely cause for concern,” worries Provincial Fire Information Officer, Kevin Skrepnek.

How about freaking out?

And how about mentioning the perils of gung-ho carbon burning? In a deluge of news reports on BC's Big Burning, repeated mentions are being made of this record dastardly drought. But not it's cause. While industrial stacks belch greenhouse gases, and holiday-makers everywhere race crazily around in cars, boats and planes – total mentions of “climate change”, “global warming” and “record-high carbon emissions” in press stories relating to major fires now burning in three provinces, Alaska and Siberia… ? 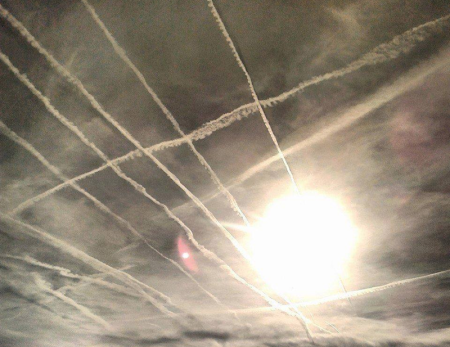 “With temperatures 12–18 degrees [C] hotter than they normally are this time of year,” the Canadian Press suggests, “a massive ridge of high pressure will remain anchored over the Pacific Northwest [with] ongoing dry conditions and warmer than normal” temperatures.

Canada's national wire service neglected to mention how this “Ridiculously Resilient Ridge” is being created by a flatlined jetstream, no longer driven by the usual north-south temperature differentials wiped out by human-induced warming… and daily maintained by an ongoing aerosol assault clearly visible to anyone looking up at those telltale white plumes who understands they should be seeing no icy contrails at this time of year.

Misha phoned next. “Nobody's gets it,” she said in a voice verging on despair. Indeed, frantic denialists are blaming The Big Drying on:

A poll of 20 countries shows the United States comfortably leading the world in climate denial. Just four out of 10 Americans think climate change is a serious threat to their carbon-belching, weather-wracked nation.

More than half of USers agree with the statement: “The climate change we are currently seeing is a natural phenomenon that happens from time to time.”

But 74% of South Koreans and 78% of Japanese disagree.

The populations of France, Italy, Turkey, Spain and Argentina have also totally flunked climate denial, with 80% or more of those surveyed telling pollsters that human activity is driving climate change. While more than 60% of surveyed Spaniards and Italians and more than 70% of Japanese consider climate change a serious threat, in China 91% of those polled say we're doomed if we don't change our ways. [Think Progress July 22/14]

Just 10 days ago, a NASA/MODIS satellite shot showed much of Baked Alaska shrouded under a 3,000+ mile cloud of smoke. Now enmeshed in the high-altitude jetstream, “it blankets much of the Northern Hemisphere in a brown-carbon haze.” [Robert Scribbler June 26/15]

Back in the White House, someone must be smelling smoke. Earlier last month at the National Hurricane Center, Obama dared suggest that climate change is fuelling extreme weather. “This is the only planet we’ve got,” came the predictable presidential sound-bite. “And years from now, I want to be able to look our children and grandchildren in the eye and tell them that we did everything we could to protect it.”

He'll be lucky if they don't whack him upside the head. This is the same guy who just green-lighted offshore Arctic oil drilling and promised to open vast tracts of public land to heavily-subsidized coal mining. [OtherWords June 7/15]

In Alaska, on that same day, close to a half-million more forest acres burned. The 314 wildfires raging throughout the state brought the 2015 total to 1,912,000 acres incinerated by human-powered climate shift and abetted by geoengineering madmen. (At some near-future Eco-Nuremberg trial, we're going to ask them why.)

Also in a recent single day, 138 new fires erupting throughout northwest Canada propelled that burn pile to more than 2,250,000 acres since the start of 2015. Some of those fire fronts among the 30 blazes burning near Great Slave Lake were more than 15 miles long.

Nearly eight out of every 10 Canadians say that Earth’s climate is changing and the federal government is failing to address this growing “problem”. More than half of all Canadians (56%) are convinced climate change is the result of human activities. [National Post May 18/15]

With geoengineering aerosols and smoke plumes alternately obscuring our skies, the most pertinent question is:

What are you doing about it?

Center For Climate And Energy Solutions

Be Part Of The Solution [EPA]

How Millions of People Can Help Solve Climate Change [PBS]

15 Responses to Geoengineering Climate Change, Is This How It Ends?