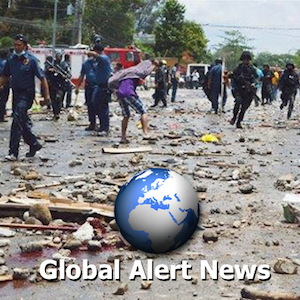 Converging catastrophes are closing in from every direction, this is our reality. Why are the masses still sleeping? Unfortunately the majority still want to sit on the sidelines and blame our ever darkening horizon on anything and everything but their own apathy. Yes, those in power are psychotic criminals who have been wreaking havoc on the planet and all life for countless decades, but how can they carry on like this? Because the majority of the human race has so far chosen to remain completely oblivious and ambivalent to the growing cancer that is consuming the world. The vast majority have not yet remembered their responsibility to the whole and risen to the occasion. How many in our own circles and societies are actually a willing and enabling part of the cancer? Agency officials, elected officials, reporters, government scientists, etc. How many do each and every one of us know or have access to? How many in our own circles and communities can we (and should we) be peacefully but persistently confronting with solid data in an appeal to them to start telling the truth? Such actions must be undertaken. Locate public email contacts for all those that are toeing the line for the collective insanity, post their emails publicly along with a description of their part in hiding the crimes of the power structure. Send credible data to the morally misguided individuals from every sector and openly CC as many concerned members of your community as you can so that the exchanges is observed by all. Put the violating individuals on notice that the public is waking up to crimes like the ongoing geoenigneering assault and that citizens will likely one day soon hold responsible (legally and morally) all those that helped to hide these crimes. How fast are the walls closing in? The latest Global Alert News update is below, let's all do everything in our power to sound the alarm.
Dane Wigington
geoengineeringwatch.org

Our most sincere gratitude to Jason and Lorna Hardy for helping to sound the alarm on the critical climate engineering issue by putting up this new powerful billboard message en route to Banff, Alberta, Canada’s #1 visited park and town (the billboard is on The Trans Canada Highway also known as Hwy 1 heading west just before the start of Banff National Park). The link on the billboard leads to the GeoengineeringWatch.org site. 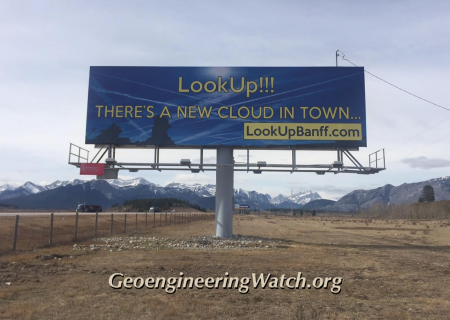