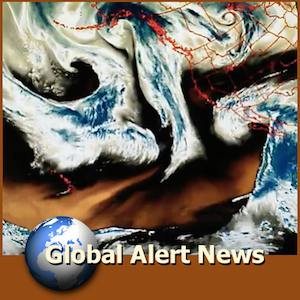 The majority of populations have been successfully programmed to believe that extreme climate and environmental changes can only occur over vast spans of time. Due to completely out of control anthropogenic activity (which includes climate engineering), such a conclusion could not be further from the truth. Countless existential threats are currently unfolding on our planet at blinding speed. In the case of climate and biosphere implosion, the threat we face is unimaginably non-linear. While industrialized / militarized “civilization” continues to poison the planet and populations (creating epidemics of diseases), “official” sources and agencies have made it their mission to convince the public that there is nothing whatsoever they can do about it.  The US government propaganda machine has been fully unleashed as the power structure attempts to galvanize US citizen support for inevitable global conflict, their last option. The latest installment of Global Alert News is below.

The distraction of the Christmas season serves those in power by fortifying the populations sense of “normalcy bias”. In conjunction with the holidays, the geoengineers have scheduled yet another completely engineered cool-down over some of the most populated regions of the US ("Winter Storm Dylan"). In the meantime, the overall planetary meltdown continues to accelerate. What can each of us do to help alter the current suicidal course of our species?
DW

The full page climate engineering awareness ad shown below went out to over 29,000 newspaper subscribers in Washington State. GeoengineeringWatch.org wishes to express our deepest gratitude to Larry and Kathy Burns for spearheading this effort. The publication circulation region is in the vicinity of the train derailment and the ad went out two days before the disaster occurred. Though the initial representatives for the paper were not receptive to the ad, persistence on the part of Larry and Kathy finally paid off when they reached the owners of the paper who were very receptive toward the cause. 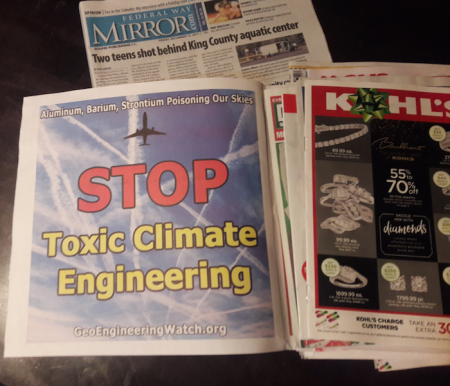 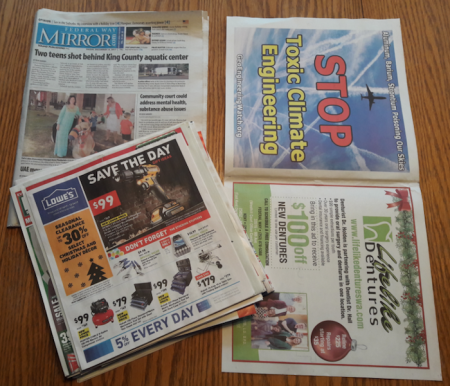