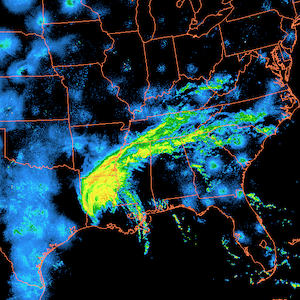 Bone dry in the West, soaking wet in the East. Is it engineered?

California’s rain continues to be cut off by the climate engineers while yet another high pressure heat dome is scheduled for the US West. Are more fires forthcoming? Already extreme conditions in the once golden state are worsening rapidly, climate engineering operations are core to what is unfolding. Various locations around the world are being subjected to the same conditions as California, though mainstream media coverage of this is nonexistent. As many parts of the planet bake and burn, record deluge and flooding are taking place in other regions. Again, climate engineering is a primary factor. Through it all, the CV-19 scenario continues to be carried out. The supply chains that sustain complex societies are rapidly breaking down. How much longer can the current reality be maintained?  The latest installment of Global Alert News is below.

We must not allow our fear of the future to paralyze our efforts in the present. All are needed in the critical battle to wake populations to what is coming, we must make every day count. Share credible data from a credible source, make your voice heard. Awareness raising efforts can be carried out from your own home computer.
DW