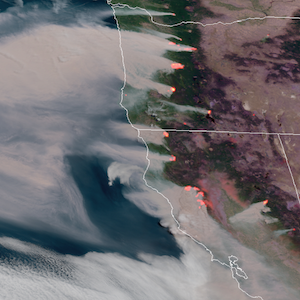 Record wildfires continue to consume the remaining forests on the US West Coast, producing a constant canopy of toxic smoke over vast and highly populated regions. Elsewhere in the US relentless deluges have now become the norm. Of all the sources of damage to our once thriving planet, climate engineering operations are inflicting the greatest toll. Through it all, the engineered CV-19 scenario is being pushed forward by those in power. As the ominous quote from the notorious Josef Mengele states, “The more we do to you, the less you seem to believe we are doing it”. The latest installment of of Global Alert News is below.

With each passing day Earth's remaining life support systems continue to deteriorate. All are needed in the critical battle to wake populations to what is coming, we must make every day count. Share credible data from a credible source, make your voice heard. Awareness raising efforts can be carried out from your own home computer.
DW