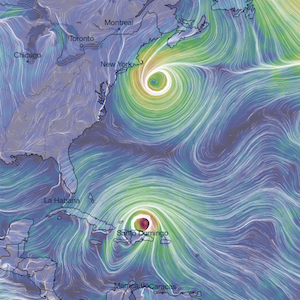 Was Puerto Rico the target of weather warfare from Hurricane Maria manipulation? Was the case the same with Texas and Hurricane Harvey? Cuba and Hurricane Irma? What are the mathematical odds of the US and Caribbean nations experiencing a sudden rash of catastrophic hurricanes after a 12 year major hurricane landfall drought? Why was there a 12 year major cyclone landfall drought in the US to begin with? These questions are especially puzzling when we consider that the rest of the world has endured record strength cyclones with record frequency during the same period. Climate intervention and cyclone manipulation programs are a verifiable reality, not theory or speculation. The 6 minute video below contains animations of radio frequency transmissions interacting and impacting hurricanes Maria and Jose. What are the possible objectives of the geoengineers?

Though the agendas behind the escalating weather warfare operations can be argued, the reality of these programs is beyond legitimate debate if available data is examined. How long will populations sit idly by while Earth’s life support systems are completely derailed by the ongoing climate engineering assault?
DW