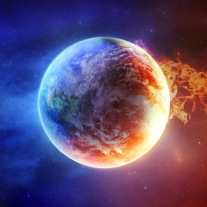 The geoengineers are going for broke with the latest all out engineered cool-down of the US. Their Rothschild owned Weather Channel theater and its cast of actors are trumpeting the “freezing planet” headlines, but what is going on with the climate in the rest of the world? The eastern half of the lower 48 states in the US is only 1/2 of a percent of the total surface area of the planet. If that’s only 1/200th of the total surface area, whatever is happening there certainly does not reveal the bigger global picture. Unfortunately, many that live in these “engineered cool-down” zones and many who only watch the corporate controlled media have completely taken the bait. So what is the larger global picture? The just released article below will shed some light on this question. Though the publication below of course does not mention the climate engineering elephant in the room, it does give clear and verifiable facts on the bigger picture.
Dane Wigington
geoengineeringwatch.org

Massive mounds of snow are piling up in western New York. More than four feet of snow fell in parts of Buffalo on Tuesday, while a second storm is expected Thursday. Temperatures dropped below freezing from coast to coast. (AP)

If you live in the United States, you have been feeling insanely cold lately. The area south of Buffalo got five feet of snow yesterday — an extreme winter weather outburst that is being blamed for a tragic five deaths — and the Weather Channel says that parts of the Midwest and Great Lakes region may experience “one of the longest sub-freezing spells on record for the month of November.” But the whole United States has been quite cold. In Washington, D.C., last night, a weather emergency was announced due to the expectation of extremely cold temperatures.

We’ve been through this drill before — last winter, actually. And it’s important to keep in mind that just because it is very cold in the United States doesn’t mean that you should question the overall warming trend for the planet. Weather shifts heat and cold around — we know that. We also know our own local experiences inherently bias us, since we live the weather in only one place. But the total global picture remains one of warming.

Our friends at Capital Weather Gang showed as much on Tuesday by sharing a simple image of temperature departures from average for our part of the world, courtesy of the Climate Reanalyzer from the Climate Change Institute at the University of Maine. Here are today’s anomalies. As you can see, the eastern United States is experiencing very unusual cold, but that dish is served with a side of baked Alaska: 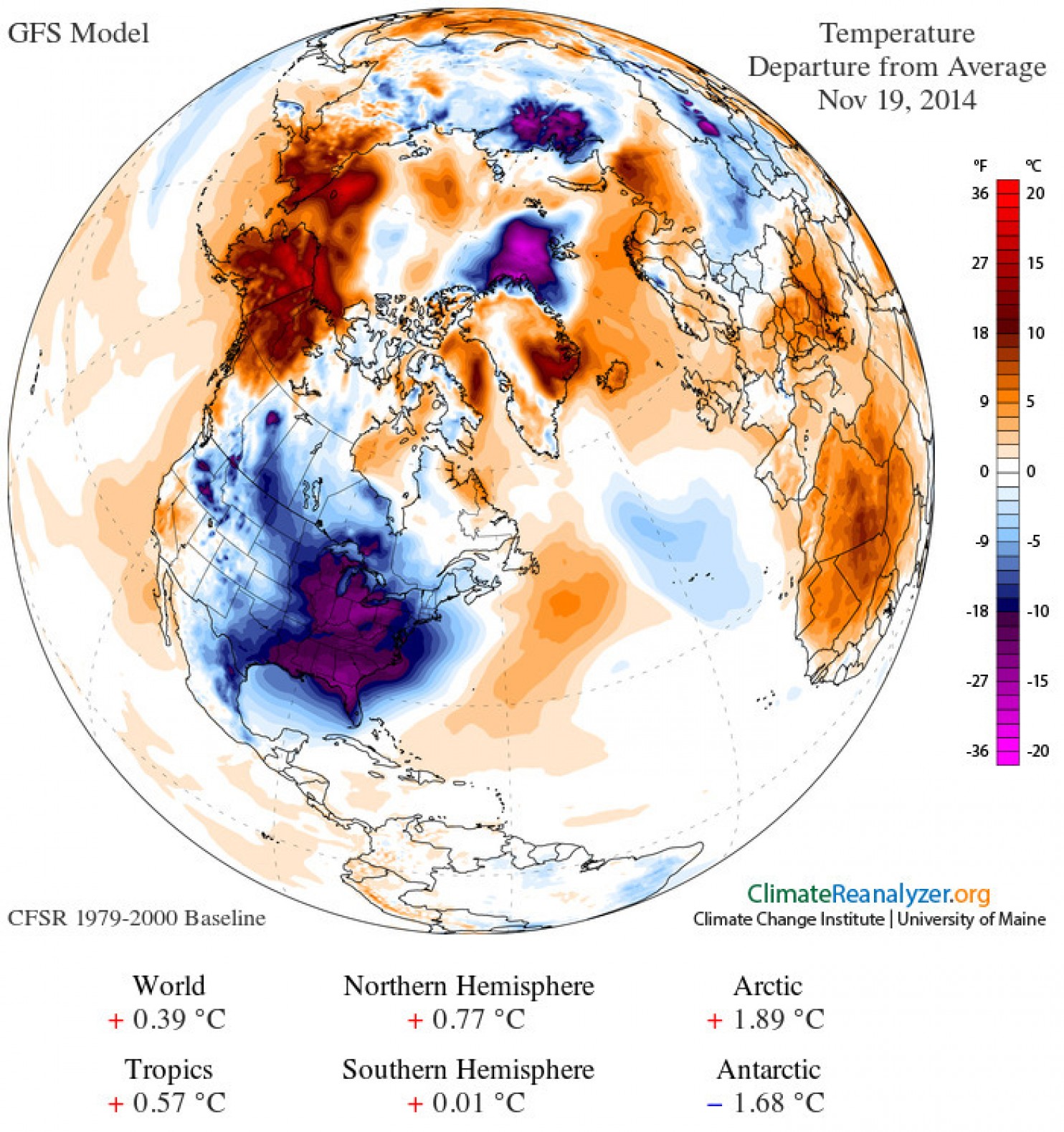 Note also that the global temperature anomaly is positive, not negative, and that the Arctic is especially warm, relative to baseline temperatures for 1979-2000.

Indeed, much evidence suggests that we may be experiencing this stark cold while en route to the warmest year in recorded history. Just recently we learned that at least according to data from the Japan Meteorological Agency (which may soon be confirmed by the National Oceanic and Atmospheric Administration), October 2014 on a global level was the hottest October on record. And even before we knew what October’s temperatures looked like, NOAA had shown that there was a very good chance of 2014 setting an overall temperature record.

So what about November? According to John Abraham, a climate scientist at the University of St. Thomas in Minnesota who has been keeping his own tally of global temperatures, November on a global level is warmer than average, but not likely to be another record-breaker, like September and October. But Abraham adds that despite November being a little cooler, “it’s hard for me to imagine that we will not break the annual record.”

“The extraordinary thing is that this is not an El Niño year, despite a lot of discussion about El Niño emerging,” adds Gavin Schmidt, director of the NASA-Goddard Institute for Space Studies, which tracks global temperatures. “And so you’re looking at a situation where you’ve got a neutral year and you’re still close to breaking records, and that’s telling you something about the whole shift in the baseline of temperatures.”

All of that said, pointing this stuff out at the moment may be a losing battle. Despite the fact that weather and climate are not the same thing — climate is the statistical average of weather — extremely cold winters do appear to shift climate beliefs. A recent study by Tatyana Deryugina of the University of Illinois at Urbana-Champaign found that not only do abnormal weather fluctuations greatly affect people’s views of global warming, but that there’s an “asymmetry” here. “Colder days weaken beliefs in global warming much more than warmer days strengthen them,” noted the paper.

But the study also found that the size of the effect depends on how long the cold (or hot) spell lasts. So, keep your hopes up: Not only for a more normal winter to resume soon, but for not too many people to confuse weather and climate change in the meantime.

9 Responses to Record Cold In A Record Warm World