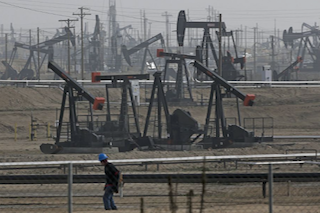 The new closures bring to 56 the number of oil-field wastewater injection wells shut down by the state after officials realized they were pumping oil-tainted water into aquifers that potentially could be used for drinking or irrigation.

All but two of the latest closures are in Kern County, in California’s drought-stricken Central Valley. One lies in Ventura County, another in northern Los Angeles County. Officials with California’s Division of Oil, Gas and Geothermal Resources spent Friday verifying that they had, in fact, closed. Of the 33, only 21 had been actively injecting wastewater before Thursday.

“This is part of our ongoing effort to ensure that California’s groundwater resources are protected as oil and gas production take place,” said Steven Bohlen, the division’s supervisor.

California’s oil fields contain large amounts of salty water that comes to the surface mixed with the oil. It must be separated from the petroleum and disposed of, often by injecting it back underground. Much of the water is pumped back into the same geologic formation it came from. But enough left-over water remains that companies must find other places to put it.

The division, part of California’s Department of Conservation, for years issued oil companies permits to inject their left-over water into aquifers that were supposed to be off-limits, protected by the federal Safe Drinking Water Act.

The problem, detailed in a Chronicle investigation earlier this year, raised fears of water contamination in a state struggling through a historic, four-year drought.

So far, however, no drinking water supplies have been found to be tainted by the injections.

Still, some environmentalists expressed outrage that so few wells had been closed.

The division has identified 178 wells that were injecting into legally protected aquifers with relatively high water quality, defined as those with a maximum of 3,000 parts per million of total dissolved solids. More than 2,000 other wells inject into aquifers that would be harder to use for drinking water, either because they are too salty or because they also contain oil.

“This is too little, too late to protect our water,” said Kassie Siegel, director of the Climate Law Institute at the Center for Biological Diversity. “With each passing day the oil industry is polluting more and more of our precious water.”

The division reported Friday, however, that not all 178 wells required closure. Some had already been shut down by their operators, while others had been converted into wells for extracting oil — not dumping wastewater.