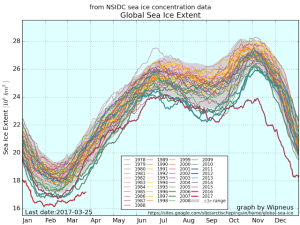 Its true that not all the sea ice is gone yet, but much of what remains is thin enough that the light passing through it is allowing algae blooms. In many places it is cracked and subject to being broken up by storms which due to the extremes of heat and cold confronting each other in that region have extremes of wind and wave.

The Jacobshaven Glacier delivering 10% of the ice melt from Greenlands ice caps to the sea no longer flows at a glacial pace but rather is retreating at 10 km/yr with the rate of retreat increasing at an increasing rate just as with the sea ice.