The Pentagon’s Preparations For Societal Collapse 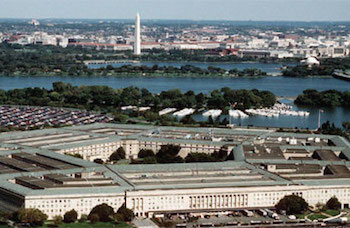 The total collapse of our current paradigm is not an if, but a when. Any that honestly examine available data should conclude that those in power are maneuvering at the fastest pace they can to prepare for the coming collapse. One of their first priorities is to keep global populations from waking up to the unfolding reality until the last moment. All of us have a responsibility to help with the efforts to wake the still sleeping masses before our ability to effectively communicate is shut down and lost. Those who are afraid of being "red flagged" for helping to sound the alarm need to find their courage. Hiding in the shadows will not save you from what is unfolding. Only if we all stand together do we stand a chance of exposing the insanity and altering the course we are currently on. Make your voice heard, it's not an option, it's a responsibility.
Dane Wigington
geoengineeringwatch.org

The Bleak Science Bankrolled By The Pentagon

​US military is increasingly concerned​latest call for research

The call, whose deadline to receive proposals is today, comes on behalf of the US Department of Defense (DoD) ‘Minerva Research Initiative,’ a multimillion dollar social science program. Minerva is designed so the Pentagon can draw on leading-edge academic expertise outside the military, on issues where it lacks sufficient internal knowledge on specific subjects or regions. By examining its areas of focus, we're offered a rare glimpse into where and how the Pentagon fears conflict will grip the world in the future.

Much of the past research funded by the initiative harnesses interdisciplinary social science to augment the DoD’s ability to anticipate future threats like civil unrest, the collapse of states, and the risk of full-fledged insurgencies. The latest research call shows that the Pentagon has allocated a budget of $8 million for projects examining how interconnected environmental and economic crises could magnify such threats.

Regions where the Pentagon is most alarmed about the risk of abrupt “societal shifts” include the Middle East, North Africa, and Central Eurasia.

Now the Minerva program wants to fund researchers tracking “the factors that affect societal resilience to external ‘shock’ events and corresponding tipping points” in such regions.

Of course, these are global trends, so it is not surprising that the Pentagon is also open to research proposals that could help the military better anticipate “potential areas of unrest, instability, and conflict,” in any “regions and states… of strategic interest to the DoD”—not just the Arab world.

The new Minerva announcement is also much more explicit about the operational significance of the projects it funds, requesting policy-oriented proposals that will “inform strategic thinking about resource allocation across defense missions (including in the cyber realm)”—in other words, help determine where the US military should focus its operations.

The research call contains an entire section dedicated to “Resources, economics, and globalization,” including an appeal for contributions exploring the relationship between “environmental stress and/or climate change” and their impact on social “stability and security.”

A major factor for study is how “resource scarcity or imbalance, including food and water insecurity” can lead to state instability. This could cover availability of resources, who owns them, and who can access them; the way in which energy consumption is rising worldwide and how it relates to health and wealth in different countries.

The Pentagon also wants to see modeling of the interplay between demographic trends and population growth, as well as wider economic issues like “wealth distribution.” This raises questions about whether the US military anticipates a risk of civil unrest at home or in other Western countries allied to the US, where some economists are predicting another economic crash.

Also noted are changing patterns of migration, which are placing a strain on national identities while speeding “immigrant assimilation and segregation.” Some scientists warn that the increasing exodus of rural populations into cities could see an urban future dominated by crowded ‘megacities’—cities with more than 10 million inhabitants. No wonder the Minerva programme is keen to analyze issues that will determine “societal resilience” in megacities: “Under what conditions might a governing body fail to cope with rapid urbanization?” asks the research call.

Resource stress, then, is no longer a question of what might transpire in decades to come. It is already aggravating political unrest, conflicts and insurgencies in regions as far apart as South American and South Asia. If new studies documenting production peaks for major foods such as milk, eggs, caught fish and maize are correct, the potential for food scarcity to generate civil unrest will likely escalate.

That’s why the Pentagon also wants to understand how issues like climate change and resource stress link up with the dynamics of social change generally, and why it’s requesting input on “mobilization for change.” The research call mentions a specific concern with how political activism can lead to terrorism and violence.

How is it, for instance, that ​food price spikes in 2011 brought millions of people out on the Arab street in vastly different countries, generating a sudden geopolitical shift whose consequences have been profoundly unpredictable?

The Minerva call explains that the Pentagon wants to better understand “what drives individuals and groups to mobilize for change and the mechanisms of that mobilization, particularly when violent tactics are adopted.” This should also help the Pentagon predict “where organized violence is likely to erupt, what factors might explain its spread, and how one might circumvent its dissemination.”

But the Pentagon wants to understand the dynamics of political dissent for its own sake, too: it asks for proposals investigating underlying mechanisms for social and political mobilization; as well as factors that “foster or inhibit” an individual moving from passive support of “fringe” social movements to what the Pentagon calls “active political mobilization.” That also includes mining deep into the very structure and makeup of “change-driven organizations” of any kind. The Pentagon wants researchers to analyse their “topology, power structure, productivity,” how and why they merge and splinter with other groups, and their overall resilience.

This is a demand for wide-ranging research on the nature of civil society, and the interrelationships of activist groups campaigning for social and political change. The danger, though, is that in the perfectly sensible desire to grasp and model the dynamics of social change to better prepare for insurgencies, the Pentagon is seeing nonviolent social movements as inherently linked to the potential for violence.

Previous Pentagon-funded Minerva projects have conflated activists working with NGOs and political parties as at once “sympathetic to radical causes” and “supporters of political violence.” And last year’s controversial ‘emotional contagion’ study on Facebook users was conducted by Prof. Jeffrey T. Hancock of Cornell University, who also received funding from Minerva to explore how “social contagions” can reach their “critical mass (tipping point)” in cases like “the 2011 Egyptian revolution, the 2011 Russian Duma elections, the 2012 Nigerian fuel subsidy crisis and the 2013 Gazi park protests in Turkey.”

Social media, of course, played pivotal roles in such episodes, which perhaps explains why the Pentagon Minerva initiative has also funded researchers to develop advanced data-mining tools that can automatically categorize activist groups and rank them on a threat-scale to US interests. One such tool, called 'LookingGlass', can identify and locate individuals, and even rank their alleged propensity for violence or terrorism, just by automatically tracking and analysing their social media posts.

The Pentagon’s efforts to better understand the role of resource stress in destabilizing governments through the Minerva initiative is understandable, if not laudable. But in the post-Snowden world, Minerva also reinforces legitimate concerns about whether tools funded by the program could further expand the surveillance capabilities of the national security apparatus, with diminishing prospects for accountability.

5 Responses to The Pentagon’s Preparations For Societal Collapse