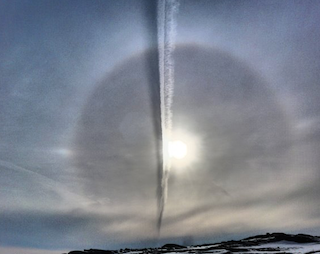 Ever notice that the skies are not a deep blue color anymore, but rather a dull milky white most of the time? Ever look up and notice how the spray left by jets lingers for hours and spreads out and falls. Ever notice those patches of trees in the forest that appear to be dying or dead? Ever heard of so many respiratory and skin problems with family and friends like Morgellans, and COPD? Ever see such weather devastation on the planet?

If you have noticed any of these things then you are witnessing BG engineering (bio-geo-engineering) in action. The consequences are extreme and most people don’t realize we’re being fumigated like bugs.

The entire globe is being sprayed under the auspices of climate change formerly known as global warming. That term was changed when it proved to make them look like the liars that they are.

The spray in concert with HAARP is used to divert weather patterns like a weapon on unsuspecting countries or states. These weather weapons are being used right now to cause a drought in California and Oregon. (HAARP Pictures)

Weather weapons are nothing new since they were used on the Ho-Chi-Mein trail in Vietnam to bring in a monsoon to halt the advancement of the enemy. China, Russia, and the USSA all have these weather weapons.

One thing for sure is this country and the world are at extinction level pollution levels. For instance;

When you combine many of these chemicals with others they have a synergistic effect and are exponentially more powerful. As for most of this pollution goes, we could change life styles and have a choice in every matter but BG engineering is not up for notification, change, or debate.

We all breathe, drink, bath, eat, and wear, these accumulative poisons every day and night. It won’t be long before your body reaches a critical mass and breaks down into disease. No matter how healthy we are, we will all eventually succumb to this.

It has aluminum dioxide, barium, strontium, and recently discovered fluoride which is host to over 300 toxins and heavy metals. Scientists have also found biological agents in the mix as well, hence the term bio-geo-engineering BG engineering for short.

This issue is the single most important thing we are facing as humanity and we must do something or we’re heading for a crematorium near us and that’s understated.

Since everybody is getting acclimated to the trails then it would be easy to one day change the composition or formula of the spray and we’d all be kissing dirt and never realizing what hit us.

As far as I’m concerned, this constitutes criminal actions subject to arrest on behalf of the DOD, corporations and the sociopathic banksters. I’m no lawyer but it seems they are violating too many statutes to be legal. There has to be something we can charge them with.

They have to be totally nihilistic. This affects their families too. The pilots’ families as well, who knowingly spray these toxins without so much as a thought to their behavior.

Soon there won’t be any pilots, it will all be automated with no one to say otherwise. The Air force has had remote controlled unmanned jets for years and some say they were used on 9/11.

We are literally paying to incrementally kill ourselves. Is our unwitting life structure just a built in form of mass incremental suicide/murder? At this point, I’d say yes!

This in my opinion is the ultimate, full spectrum form of eugenics.

California, just like every other state in this nation is under siege right now. Political solutions are out the window because the criminally inclined politicians infested in our government can’t be trusted to act in our best interest and won’t prosecute their comrades.

There’s an important video with a link I think everybody should watch. People are definitely trying to stop this insidious poisoning but unfortunately, so far, their efforts are in vain. When this many people show up to a meeting and the frustrations continue from inaction of the California government and all other states as well, I call that time for hands on actions.

This is a response from a person at the meeting;

“Those at the top, that California is relying on for help, are being silenced by the criminal regime that has taken over the US. I've been in and out of fits of tears of sadness and anger. We all know the spray is toxic and killing trees and wildlife, and we know we are being forced to inhale it. It already reeks of omnicide.”

Omnicide is genocide of all life forms at once. Sad but true we are being murdered incrementally along with the planet and all its inhabitants.

In a perfect world, we all would get answers and take actions to stop this. But in this far from perfect world I would resort to sit-ins’. If it were up to me, I would try to halt the flights by staging a peaceful sit in on the tarmac. Can you imagine hundreds of people at every exterminator/contractors site sitting down on the tarmacs in full view of the media in defiance of these global criminals?

This would be something the media couldn’t ignore. This would wake others and soon we would have our political servants trying to hide from us because they know they won’t be reelected if they don’t do something to stop it.

They would also be running away because they made a deal with the devil that they don’t want to answer to us for that, or the devil who bought them. They just don’t care that you can’t make deals with the devil.

If you’re not sure how they get away with this, read this from our own US code;

1520. Use of human subjects for testing of chemical or biological agents by Department of Defense; accounting to to congressional committees with respect to experiments and studies; notification of local civilian officials

(a) Not later than thirty days after final approval within the Department of Defense of plans for any experiment or study to be conducted by the Department of Defense, whether directly or under contract, involving the use of human subjects for the testing of chemical or biological agents, the Secretary of Defense shall supply the Committees on Armed Services of the Senate and House of Representatives with a full accounting of such plans for such experiment or study, and such experiment or study may then be conducted only after the expiration of the thirty-day period beginning on the date such accounting is received by such committees.

1524. Agreements to provide support to vaccination programs of Department of Health and Human Services.

1520a. Restrictions on the use of human subjects for testing of chemical or biological agents.

The Secretary of Defense may not conduct (directly or by contract)—

(1) Any peaceful purpose that is related to a medical, therapeutic, pharmaceutical, agricultural, industrial, or research activity.
(2) Any purpose that is directly related protection against toxic chemicals or biological weapons and agents.
(3) Any law enforcement purpose, including any purpose related to riot control.

Read this document called Silent Weapons For Quiet Wars it will give you chills and good insight into this madness. I had the real document in my hands for a few months to do some restoration on it from water damage and I know for a fact it’s real. Here’s another document you can read.

To sign up and view other videos or read from Dane Wigingtons’ site on geo-engineering, join the fight. Some would say dreams of fools are pleasant. But I know for a fact dreams come true and I hope this one comes to fruition because, ABSOLUTELY NOTHING is going to change for the better until this poisonous fumigation stops.

John Marshall is a Vietnam era Marine Vet, Graduated from Rogue Community College in 2000 with an AAS degree. I’m a Father of an Iraq Vet and daughter in-law who’s also a Vet of Iraq. I Lived in Alaska for three years repairing RVs’ and repairing appliances. I returned to Oregon in 1997.

I maintained a 3.5 GPA and I enjoy researching and writing and playing music locally. I worked for the Josephine County Oregon Parks dept from 2000-2006 as a park host and seasonal employee at Wolf Creek Park.

I used to organize and play local concerts to raise funds for the JoCo food banks. I enjoy playing the motor cycle runs and blues festivals with bands like the Heat Bros (formally Canned Heat) and Main Street Blues Band.

I am a defender of liberty obeying my oath to the constitution by exposing corruption and tyranny in local and national government.