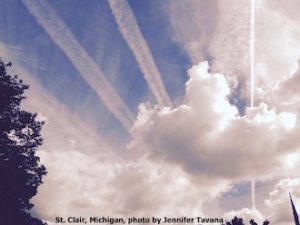 The more ground we gain in the fight to expose the dire issue of climate engineering, the more disinformation people there will be in this equation. They will aggressively try to slow down our progress and to cast doubt in any way they can. Debating a "double-team" of disinformation characters on a major radio station can make for some interesting conversation. After standing ground with solid information against the ideologue "head in the sand" disinfo host on an earlier show, he invited me back for another session. The second show was to be with his hand picked "expert" who teamed up with the host in an effort to discredit and marginalize the geoengineering reality. The two of them did their best to "debunk" hard geoengineering data, I will leave it up to the viewer to decide the outcome of this "debate". Though the interview was scheduled for a full hour, it seemed the disinformation "tag team" decided to throw in the towel at just over halfway through, when they apparently felt they were losing ground. The host even cuts off one of his own listeners who calls in to agree with the facts I had presented. We should all keep this in mind, deniers want to argue, create dispute, division, and cast doubt. They thrive on this. It is also important to remember that if such ideologues were really looking for the truth, they would have found it long ago. Generally speaking, disputes with people like those described above go nowhere. The best approach with willfully obstinate people is to pass them information and walk away. If they are truly interested in honest investigation they will look, if not, then you will only waste your time and energy in dialog with them. To engage in such disputes only feeds their idiocy. "You cannot wake a person who is pretending to be asleep", as the saying goes. On the occasions when standing ground and debating is worth the time and effort, it is my hope that the national radio show debate in the video below might be of assistance to activists that inevitably find themselves in such exchanges. My most sincere gratitude to Karen Ball for assembling this entire video. Her help is greatly appreciated in this battle.
Dane Wigington
geoengineeringwatch.org