PBS Covers Climate Engineering, How Much Longer Can It Be Hidden? 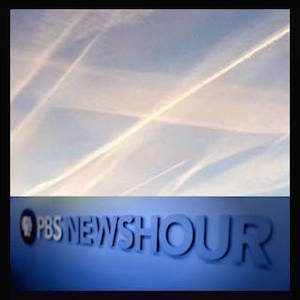 PBS is a disinformation mouthpiece for the establishment, nothing more than paid propaganda. Those that believe there is any objectivity in the reporting of this bought and paid for agency of the power structure are sadly mistaken. Like "journalists" at so many other mainstream media sources, the PBS crew is not allowed to tell the truth (if they want their paychecks) and they lack the courage to speak the truth out of their own convictions. In the 8 minute video below, PBS does their best to push climate engineering as a potentially viable option. Of course, they do not mention that global geoengineering has been going on for over 6 decades with catastrophic results. Is anyone surprised to know that PBS taken the side of defense contractor Lockheed Martin (a company that is directly involved with the climate engineering cabal) over the public?
Geoengineer David Keith  (whom I have had the displeasure of meeting face to face at an international geoengineering conference) is no more than a public relations prop for those in power. He has no regard whatsoever for the truth and in recent years seems to make it up as he goes along. At the conference I attended with Keith, he was pushing for the dumping of 10 to 20 million tons of aluminum into the atmosphere annually. Keith no longer publicly mentions that aluminum is the material of choice for aerosol geoengineering, though he made this point clear in the past as the 4 minute video below clearly shows.

David Keith then went on to make clear that there had been virtually no scientific studies done in regard to the contamination to the entire planet that would obviously be caused by his proposal of filling the atmosphere with aluminum nanoparticles.

Now PBS and Keith have joined forces in a campaign of disinformation designed to continue obscuring the fact that geoengineering has been going on for decades with catastrophic results. PBS and David Keith also seem to be working toward softening the public up to the concept of climate engineering so that they might accept the climate modification insanity once it can no longer be hidden in plain sight. Current science study makes clear that geoengineering can't work, so why are PBS and Keith engaged in the helping to hide the climate engineering crimes? Again, because that is what they are paid to do which makes them accessories to these crimes. People at PBS have public emails, find them and send messages of outrage to them in regard to their completely dishonest reporting. Do the same with Keith, his public email is easy to locate online. Make your voice heard. DW

52 Responses to PBS Covers Climate Engineering, How Much Longer Can It Be Hidden?