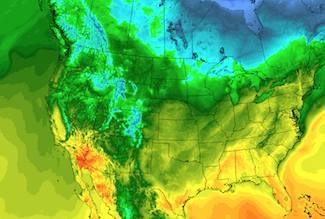 Planet Earth, and all that live on it, are in the throws of unimaginable and immediate upheavals.  Even at this late hour, with the walls closing in from every side, the vast majority are completely oblivious to the tidal wave that is towering above our heads. Earth's climate and life support systems are unraveling at unimaginable speed as we free fall into the 6th great mass extinction on our planet.  In spite of all this verifiably and undeniably occurring, for the vast majority the immediate threat of a lifeless planet is not even on the radar as the graph below clearly indicates.

The total moral depravity, deception and betrayal by mainstream media  has now ensured that the population as a whole has no idea how close the current reality is to completely and permanently disintegrating.

Our planet is dying, this is a statistical and mathematical fact. The life that Earth has supported for untold millions of years will soon perish if there is not an immediate and total change of direction for the human race. 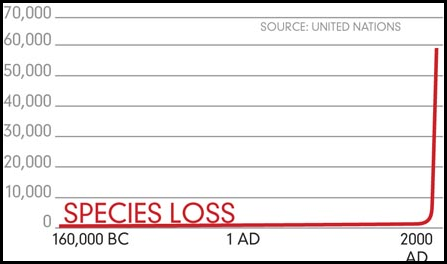 Some 200 species of Earth's plants, animals, and insects are going extinct every single day.

In the last 40 years over half of Earth's wildlife had been killed off while the human population has doubled in the same period. How long can such a trend possibly continue? 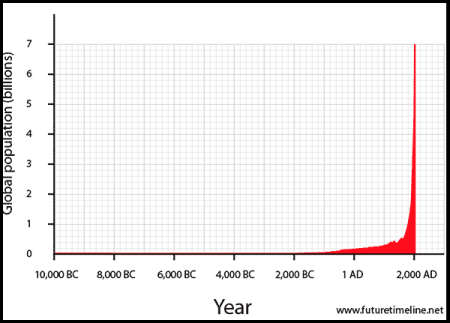 Well over 200,000 people are added to the planet each and every day.

As anthropogenic activity began to overburden and heat the biosphere (since the onset of the industrial revolution),  some 70+ years ago those in power made the fateful decision to attempt the engineering of Earth's climate system in the self-serving and suicidal effort to keep "business as usual" and to use the weather as a weapon of war. Aside from the inarguable destruction of weather warfare, the ever expanding global geoengineering/solar radiation management/ocean fertilization programs have now manifested into the greatest and most immediate threat to life on Earth short of nuclear cataclysm. Recent studies confirm that  geoengineering and ocean fertilization CAN'T WORK. After 70+ years of climate engineering and weather warfare, the planet now appears to be descending into a runaway greenhouse event, an "abrupt climate shift" that could lead to "Venus Syndrome". 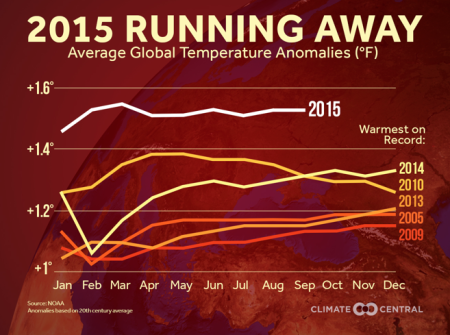 2015 was the warmest year since record keeping began, breaking the record just set in 2014. 2016 will break the record again and is already on path to do so. January 2016 was the warmest month ever recorded on our planet, February 2016 completely shattered that record again. Global Geoengineering is not mitigating global warming, it is helping to fuel it overall. Short term (toxic) cool-downs can be achieved at the cost of an even worse overall warming. The "global warming slowdown" narrative was a carefully crafted and well funded lie to help the geoengineers sell their programs of destruction as successful, a complete fallacy.

How fast is the far North warming? At an astounding and completely unprecedented pace. 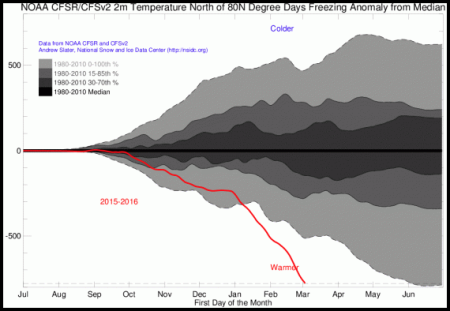 We are in uncharted territory as the Arctic meltdown spirals out of control spawning numerous climate feedback loops.

The Northern Hemisphere is warming at an even faster pace than the Southern Hemisphere. This is astounding considering the constant record heat that is occurring in locations like Australia. 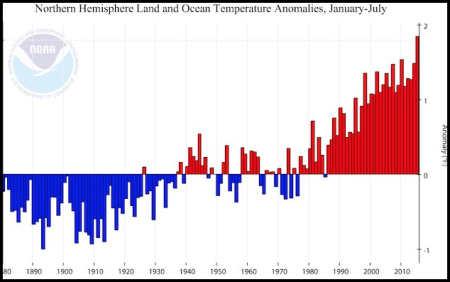 The deployment of global climate engineering was deployed at a significant scale just after WWll. Though there was an initial cooling effect as is clearly visible on the graph above, the rapid buildup of greenhouse gasses like Co2 and methane, and the countless negative consequences of solar radiation management built up rapidly. These factors soon overwhelmed the initial cooling effect of climate engineering and the planetary warming continued upward in the mid 70s, this trend is now accelerating. As previously mentioned, the ever more massive geoengineering assault is now only making an already horrific climate scenario far worse overall in addition to contaminating the entire surface of the planet. Geoengineering is also a form of biological warfare.

In the completely misguided and unimaginably destructive attempt to temporarily and toxically cool some regions of the US, the climate engineers are heavily spraying (aerosolizing) massive flows of moisture that are pouring into the country from the west and the south. The brighter the reflection of the cloud cover on the combination satellite radar map below, the more aerosolized it is. The more moisture the geoengineers have to work with, the more spraying they carry out. The goal of solar radiation management is to broadcast out the available moisture into the most expansive cloud canopy possible. The planetary decimation from the ongoing climate intervention grows by the day, the creation of record drought in some regions, record deluge in others, and lethal ozone layer destruction, are only a few of the endless list of known consequences. 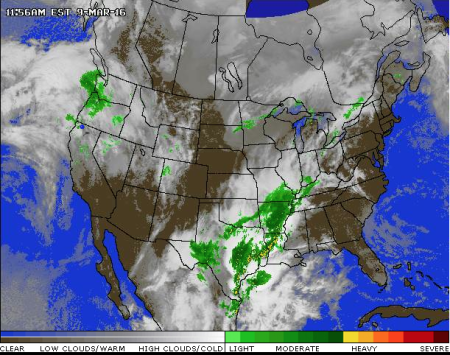 The atmospheric aerosol saturation tends to create an amorphous featureless cloud canopy when viewed from the ground below the flow of "storms" and atmospheric moisture currents.

The electrically conductive heavy metal aerosols that are saturated into the incoming moisture flows can then be scattered into a much wider region with the use of ground based radio frequency transmissions. The image below was taken on 3-9-2016 as the moisture streams in over the Pacific Northwest from the record warm Pacific Ocean. The transmitter location is northeast of Portland Oregon. The radio frequency transmissions are utilized to scatter the available moisture into vast regions of mostly rainless overcast skies as show in many locations on the previous map. 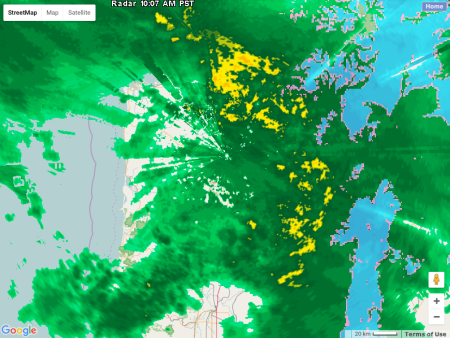 The process of manipulating atmosphere moisture (for creating SRM  cloud canopy over the largest possible regions) is wreaking havoc on the climate and ecosystems.

What is the effect of using the flow of moisture from the west for a form of "evaporative cooler" ? As already mentioned, the climate engineers can temporarily and toxically cool some regions at the cost of a worsened warming overall. If the NOAA "forecast" map below does not alarm you, it should. Each shade of color represents a 2-4 degree variance of temperature, above or below "normal", depending on the color hue. Record shattering warmth will continue in much of the country  ( adding to what is already the warmest US winter on record ) as the West gets the toxic cool-down complete with constant chemical ice nucleation of the incoming moisture flow. 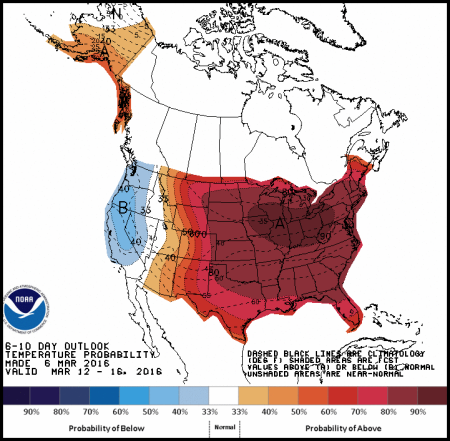 Extreme and unprecedented imbalances like those shown in the map above are telltale signs of a climate system that is completely unraveling. Though there are countless sources of anthropogenic damage to the biosphere and climate system, global geoengineering is mathematically the most destructive of all.

The Total Betrayal Of The Climate Science Community

Mainstream media is not the only group that has completely betrayed humanity, the climate science community has done the same. Though a constant parade of false headlines from well funded sources has convinced many that the climate change threat is being exaggerated, the exact opposite is true. What we face is far more grave and immediate than any of the "worst case predictions" from completely controlled organizations like the IPCC (the largest scientific panel ever created in human history). The most severe betrayal is now coming from "science organizations" like "AMEG" (the Arctic Methane Emergency Group). Though AMEG's assessment of the threat from thawing and releasing methane deposits is valid, AMEG's call for global geoengineering are nothing short of criminal tyranny.

In regard to AMEG's call for emergency geoengineering to be immediately deployed (as if it has not already been going on for 70 years with catastrophic consequences), there are only two possibilities, either they are criminally ignorant of the very subject of which they claim to be experts, or they are lying. In either case, their calls for the commencement of climate engineering is criminal and should be publicly confronted. Taking the time to locate public email contacts for AMEG members, mainstream media and meteorological personnel, is essential. These contacts should then be circulated to others so that a constraint stream of communications calling for their accountability can be unleashed by the public. Such communications must be articulate and peaceful. This being said, the communications can and should point out that the public is rapidly waking up to the climate engineering crimes and will certainly soon hold legally and morally accountable ALL THOSE that directly or indirectly participated in these crimes. This includes all the journalists, scientists, and meteorologists that helped to hide the ongoing geoengineering assault by deceiving the public about the issue. There can be NO LEGITIMATE DISCUSSION about the state of the climate without first and foremost addressing the ongoing global climate engineering insanity. As the climate system continues to implode, the power structure will be more dangerous than ever before. Will WWlll be their final option as populations awaken to their crimes? There is much work to be done in this critical fight for the greater good, all of us must make our voices heard while we yet have time to do so.
DW