Climate Engineering Chemical Cool-Down For The US 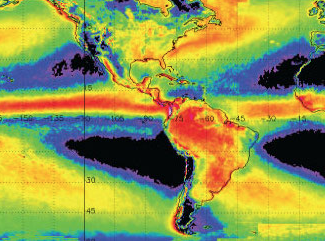 As the global climate system implosion gains momentum, the geoengineers are displaying increasing desperation in their attempt to create temporary toxic cool-downs in a rapidly warming world. Again, and again, and again, the Eastern US has been the focus of massive (and highly toxic) climate engineering cool-downs. Why? To continue feeding the climate confusion amongst the public in the most populated portions of the US while the meltdown of the planet continues into a runaway warming scenario with climate engineering helping to fuel the overall fire. Where are the only below normal temperature zones in the current "departure from normal high temperature" map shown below? Heavily populated regions of the US and Europe. Why aren't the paid actors on power structure owned propaganda programs like The Weather Channel (who also has ties with Monsanto) even mentioning the continued incineration of Canada, Alaska, the Pacific Northwest,  Australia, India, Asia, the UK,  the Arctic, Siberia, and the rest of the planet as a whole? Because they are paid to pacify the population and to cover the tracks of the climate engineers. 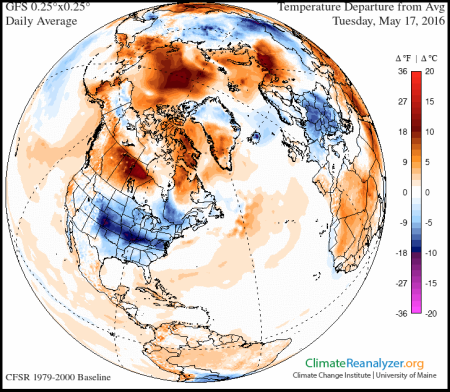 The bright blue regions of record low temperatures that stand out in the Eastern Center of the US are a shocking (and completely engineered) anomaly in a record warm world.

A further highlighting of specific temperature "departures from normal" is shown in the next map. 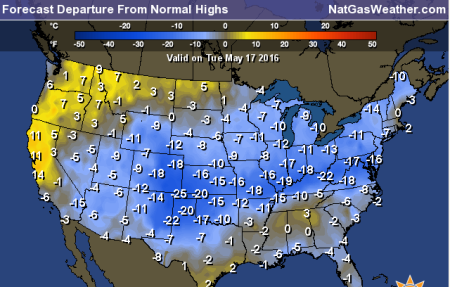 Radical varied localized temperature extremes (that have become the norm in recent years) are historically unprecedented. 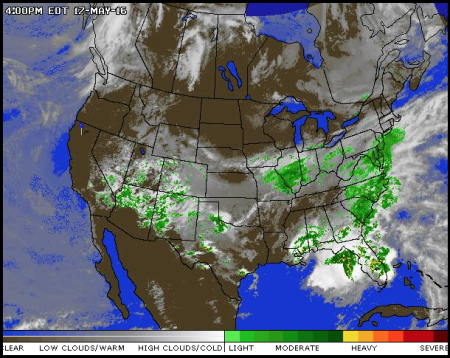 Note the near 90 degree corner taken out of the precipitation convection zone to the west of Florida. This is an ever more common signature of radio frequency manipulation.

Consider that much of moisture that fueled the record cold and May snow that just fell in the US East originated in a record warm Florida and gulf of Mexico. The morning LOW temperature in Florida on 5/17/2016  (the date the above satellite photo was captured) tied all time record of 78 degrees (again, 78 degrees was the nighttime LOW temperature). The record Florida warmth has also fueled record rain. (A record warm world/atmosphere must produce more precipitation unless the geoengineers choose to create drought as is the case in California and other regions around the globe which is radically impacting populations). How does record warm moisture flow north to create record cold and snow? Welcome to the engineered winter deception carried out with jet stream manipulation and chemical ice nucleation. As the weather makers prepare for the coming radical cool-down in the US West, massive aerosol spraying can be seen in the current satellite image shown below, taken on 5/19/2016 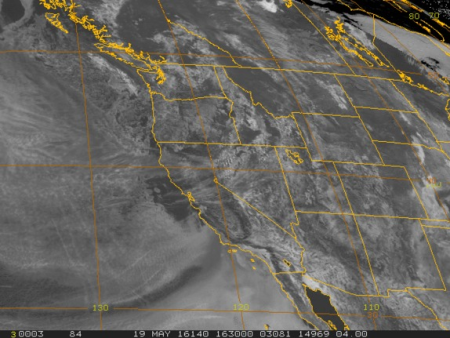 Blanket solar radiation management spraying over the oceans (and over land) is wreaking havoc on the web of life and the climate system as whole. "Ocean fertilization"  with highly toxic materials is another deadly aspect of geoengineering.

So what is the "scheduled weather" for the days following the engineered cool-down of the Eastern US? The NOAA "forecast" map below is yet another shocking illustration of complete manipulation of the climate system. 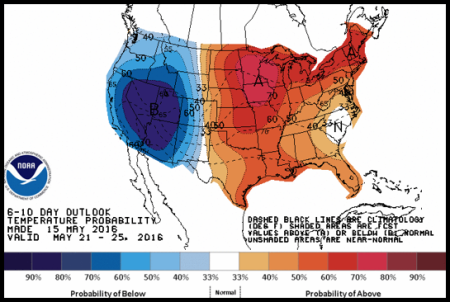 From record warmth in the US West, to potential record cold. The record cold in the East will flip to possible record highs. Each color shade represents 2-3 degrees of variation from normal, high or low, depending on the hue.

What is the bottom line regarding the overall state of the global climate? The planet is already in a runaway warming scenario, April 2016 yet again shattered all former global temperature records.

The gravity of the overall global temperature rise cannot be overstated, climate engineering/solar radiation management is not a form of "mediation" as those in power would have us believe, geoengineering is a weapon of mass deception and war, nothing less.

In the desperate effort to hide reality from the population for as long as possible (and thus to keep business as usual for the military/industrial/corporate complex) the climate engineers continue to create the toxic temporary cool-downs which are only fueling the climate destruction and overall warming of the biosphere. Why aren't employees of the National Weather Service and NOAA sounding the alarm? These government scientists have no first amendment protection and now also have also had an illegal federal gag order placed on them. The anomalous cool-downs are as engineered as the corporate media hype surrounding these weather whiplash events. The fight to expose and halt global climate engineering is nothing less than a fight for life, make you voice heard in this most critical battle.
DW

171 Responses to Climate Engineering Chemical Cool-Down For The US